“It’s all about the ratios” Paul Hornby

Also recreational users of cannabis seek the medical effects of the plant, says pioneering scientist Paul Hornby in an exclusive interview with YWS. Thus it is senseless to differentiate into groups of consumers. His vision are individually designed strains, while he sees himself as an explorer, discovering the so far unknown territory.

At Cultiva hemp fair in Vienna (6th – 9th of October 2016) YWS had the opportunity to interview one of the most important scientists in the field of cannabis: Dr. Paul Hornby – PhD in Human Pathology, expert on anaesthetics and in the field of Biochemistry – from Vancouver. He is a living legend, now based in Barcelona. We at YWS of course, we’re deeply honoured to have him.

Not solely Hornby that analysed the cannabinoid composition – there are 113 cannabinoids found in hemp – of more than 700 strains, in his laboratory, Hedron Analytical Inc., founded in 1988. Summing up the detailed chromatography of 15.000 of Cannabis plant samples. But Hornby, who was in cancer research in British Columbia for nine years, is also doing so-called plant fingerprinting for a broad variety of herbs, which are used as medicine.

And he is also an advocate for medical and recreational use, which are in fact synonymous to him: “Anybody who consumes Cannabis is in a way or another a patient”, he underlines, a critique on the current differentiation between “medical users” and those who do it for pleasure. “They are seeking to calm down, enhance their quality of sleep or minder depression for instance.” It’s a marvellous, unique plant, he emphasises. “Used for millennia to treat the illnesses of mankind”, he laments the opposition of regulating and liberalising Cannabis use by the huge pharmaceutical cooperations worldwide. And their massive lobbying against the legalisation.

More than a decade of Hornby’s scientific work was marked by being on the edge or even beyond legality. “We were fearing every single morning when we come to the laboratory, that a ‘police-line-do-not-cross’-tape would block our access.” Hornby even was placed for twelve months under house arrest after his plantation – meant as supply for the first nation-wide dispensatory in Vancouver – was seized by the police, and Hornby put on trial. Not to mention, that he had to pay a 1000 Canadian Dollar fine. 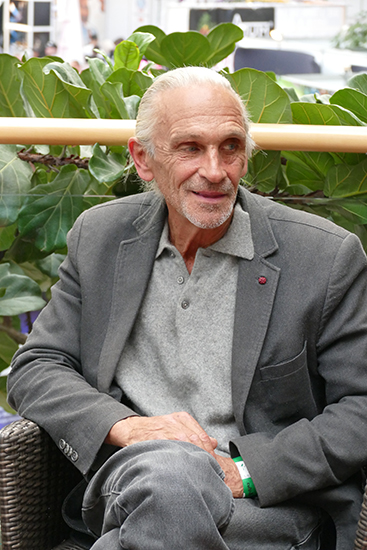 By now, the situation in Canada, as we know, has relaxed significantly. And Hornby is holding a licence to plant cannabis for analytical purposes. Dispensatories are legal, medical users do not have to fear the persecution by the law. Even Hornby is now allowed to plant approximately 80 cannabis plants, together with his wife and children reaching a number of almost 300. And Hornby is closely working together with Advanced Nutrients, a firm that provides solutions for hydroponic Cannabis cultivation, and of course, the Canada Compassion Club, an association that provides medical Cannabis to seriously ill patients.

Hornby is, as he points out to YWS, absolutely convinced, that there are specific strains, which due to their differences in THC-/CBD-contents are preferred by patients being treated on a broad variety of pathologies. And furthermore, that in an ideal world, he assures, maybe sooner than later, we could even design strains, which are personalised for each individual’s needs. “It’s all about the ratios”, he says: “Not solely the THC, or especially the so-called Delta-9-THC. But all the cannabinols, and cannabidols in the mixture.”

So Hornby closely collaborates with Dr. Mariano García de Palau from Spain’s Kalapa Clinic in the field of treating childhood epilepsy. As well as with Slovenian marijuana-activist Bozidar Radišič, another living legend. As he was the first Slovenian to open a grow shop in the town of Murska Sobota, and who had to spent jail-time three times in his life, even going on hunger-strike. As Radišič established a pioneering agency for cannabis quality control. And already for spring 2017 Radišič, founder of ONEJ NGO is of course a member of IACM, and about to plant the first large scale Cannabis plantation for experimental purposes. And he is closely monitoring the treatment of glioma-patients in his home-country, with high-doses of THC. From 160 glioma-patients in Slovenia, only two died in the past two years of this especially malignant form of brain tumour, which also captured the attention of Spanish doctor Manuel Guzmán. One after suffering a head injury just while recovering from the chirurgical removal of the tumors. The second due to a high number of rapidly growing glioma in his brain.

International cooperation between scientists and activists is essential, for pushing the limits, of our knowledge on cannabis in medicine, but also to guarantee the access of patients to the benefits this plant may offer to their conditions. And Hornby, as well as Radišič, García de Palau and of course Guzmán, will expand our horizons on treatments with Cannabis in the months and years to come.

Tom Hanks has taken an important step in his career as an activist by partnering with Heather Pyces, a student at Cornell University, to investigate the benefits of cannabidiol ...