On the cutting edge of news and current affairs, Marvel introduces the hot topic of the legalisation of marijuana in Issue #12 of its comic book saga, following the change in law in New York State last August.

The state of New York changed its stance on the possession of cannabis and has since proposed expunging minor convictions for possession. Thus, those caught with small amounts do not run the risk of ending up behind bars and will get away without having a criminal record. What is unavoidable, of course, is a fine. In other words, neither marijuana use nor possession are completely decriminalised despite the law now being more permissive and flexible. Marvel takes advantage of this situation to introduce the debate into a new plot of ‘Daredevil’.

In this issue, supervillain Wilson Fisk (aka ‘The Kingpin’) joins the city’s economic and political elite in his new role as Mayor of New York. Fisk raises a new initiative at that meeting: the legalisation of marijuana.

‘I have the land for growing. I have the world’s best people to cultivate it. The biggest hurdle has been to ensure that the licensing department’s rules for selling approval fall in my favour and no one else’s. But it’s gone smoothly so far.’

This is how Daredevil’s arch-enemy explains his plans at dinner, triggering taunts from some of the guests. Although some are willing to support this outlandish initiative, one man in particular, Tyrone, is particularly critical of the new Mayor – from his physical appearance to his ambition. All this is overheard by Wilson, who has left the table momentarily. He tries to maintain his calm composure but when Tyrone eventually corners him in the bathroom, Wilson is unable to control his rage any longer and beats the tycoon to death. 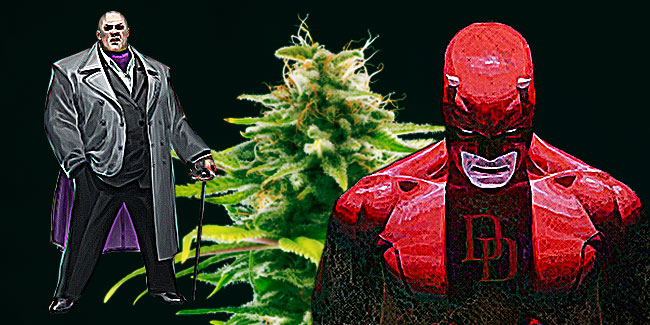 The team, consisting of writer Chip Zdarsky and cartoonist Marco Checchetto, score points with a small plot detail, which might go unnoticed but which gives great depth and reality to the moment: this is the response of one of the tycoons invited to the dinner who, at one point in the conversation, comments on his concerns about the possible negative effect that cannabis legalisation would have on his investments in state prisons.

Without a doubt, the creative team of “Daredevil” don’t miss a trick. And we’re delighted about that!

A few days ago news was published in some media sources indicating that cannabis affects women differently than men, and that this difference is due to estrogen. This study conducted ...