This Election Day in the United States will be also remembered as the day when four new states legalized cannabis for recreational use. Mississippi has done so for medical cannabis, and Oregon and the city of Washington have given the green light to decriminalization of other types of controlled substances. Moreover, South Dakota, Arizona, Montana and New Jersey decided to put on the ballot last November 3rd presidential Election Day seeking the approval of the citizens in a referendum vote to legalize recreational use of this plant, and the results in all four states have been positive. With these new additions, there are fifteen US states where the use of marijuana by adults 21 and over is now legal, or will be in the next few months, once the new proposed laws are approved and come into effect. Eventually, more than 111 million people will be allowed to consume recreational cannabis in this nation, a third of the its total population who live, in addition to these new states, in Alaska, California, Oregon, Washington, Nevada, Colorado, Michigan, Illinois, Massachusetts, Maine, and Vermont.

In Arizona, 59.85% voted in favor of Proposition 207, allowing recreational use for adults 21 years and older and homegrowing up to six plants per person, and establishing a new 16% tax on its sales. It will also allow people who have been previously convicted of consumption, transportation, possession or cultivation of marijuana to request the expungement of their criminal record for these offenses as of July 2021. However, with this new law, consumption in public spaces will remain banned but it will be now considered, as here in Spain, a misdemeanor offense punishable by a fine of a maximum of 300 euros. Arizona, where medical cannabis has been legal since 2010, did already try to legalize the recreational use of cannabis by referendum back in 2016. Then, the proposal reached only 48.7% of the favorable vote. New regulations for recreational cannabis are expected to take effect late November and first licenses for stores to be granted on January 2021.

Moreover, Montana has held two referendums on the issue of recreational marijuana up to now. First consultation aimed at establishing a minimum legal age for the use and possession and got the voters’ approval with 57.72% of the ballots. The second, passed with 56.59% of the votes, allows possession and recreational use of cannabis for adults 21 years and older, and provides for a special 20% tax on sales. The newly approved proposition sets up a pathway to strike prior marijuana convictions from criminal records and includes provisions for home growers allowing up to four plants as long as they remain not visible in the public space. Marijuana consumption will still not be allowed in public spaces, although fines in Montana for this minor offense will be limited to a maximum of $50. The law is expected to take effect on January 1, 2021. In Montana, medical cannabis was legalized in 2004 even earlier than in Arizona, although new laws subsequently limited its use and advertising until 2016.

In New Jersey, a referendum was held on November 3 that resulted in the approval of three new proposals: the legalization of both recreational use and cultivation of cannabis, a property tax cut for veterans and the postponement of legislative redistricting in the census. Proposal to legalize recreational use of cannabis passed by 66.94% of the citizens of this state voting in favor – with 64% scrutinized, the result is still provisional.

Finally, South Dakota, one of the few states in the United States where a medical cannabis program hadn’t yet been implemented, makes history by passing both medical and recreational adult-use of cannabis on the same ballot. On last November 3 referendum, proposal for a medical cannabis program reached the support of 69.2% of this state population, while the legalization for recreational use got 53.41 % of favorable votes, both bills taking effect in July 2021. 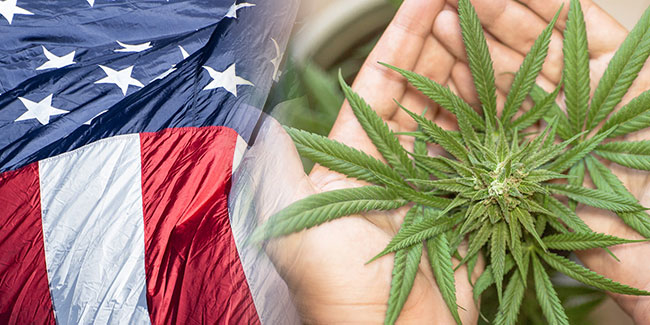 In addition, Mississippi has also held a referendum on Election Day, asking its citizens on the legalization of medical cannabis, and becoming the 34th state where citizens are offered the chance to use alternative therapies using this plant. This referendum proposed two models or frameworks for its legalization. Initiative 65 allows the use of medical cannabis to treat more than 20 medical conditions and the possession of up to 2.5 ounces – 70.8 grams – and imposes a 7% tax on this type of cannabis sales. As an alternative, Initiative 65A, proposes the legalization of medical cannabis but only for critically ill patients. The consultation required Mississippers to first vote yes or no on whether they wanted either initiative to pass and then to pick one of the two. 67.95% of the population said yes to approve medical cannabis for one of the two variants and the final proposal passed with 74.1% of the favorable votes.

Oregon and Washington D.C. have gone further. On the one hand, Oregon becomes first state to both legalize personal use and decriminalize possession of any type of substance considered hard drug. The passage of Measure 109, with the support of 55.81% of the voters – after 80% scrutiny of votes-, gives the green light to the creation of a program to permit licensed service providers to administer psilocybin-producing mushrooms and fungi to individuals 21 years of age or older. A second proposal voted in referendum in this state, Measure 110, passed with a 55.8% favorable vote – also after 80% scrutiny – eliminates criminal penalties for low-level possession of controlled substances, currently a Class A offense punishable by up to a year in jail and a maximum fine $6,250, and reclassifies this misdemeanor as a Class E violation punishable only by a $100 fine. On the other hand, the District of Columbia has also reviewed its regulation on psilocybin mushrooms and other hallucinogens, albeit far less ambitious. Initiative 81, or Entheogenic Plants and Fungs Measure, was on the ballot and approved by a large majority of 76.3%, declares that police shall treat the non-commercial cultivation, distribution, possession and use of entheogenic plants and fungi as “among the lowest law enforcement priorities”. The proposed initiative defines these “entheogenic plants and fungi” as species of plants that may contain ibogaine —also known as boga—, dimethyltryptamine —or DMT—, mescaline —such as peyote or San Pedro—, psilocybin or psilocin.

Yellow leaves on cannabis plants: how to treat and prevent them

The appearance of yellow leaves on your cannabis plants can be the first sign of a serious problem. However, not everything is lost if you know how to react quickly and appropriately. ...