Due to the lack of agreement among member states and in spite of UN recommendations, the resolution on medicinal use of cannabis was put to a vote after several postponements

The Commission on Narcotic Drugs (CND), the main policy-making body of the UN in drug-related matters, will finally hold a historic vote to ease the rigorous control of cannabis introduced almost six decades ago and reduce restrictions on its use with therapeutic purposes. This question was already on the agenda for the meeting that took place in April 2019, although there was no agreement then, with Russia leading the opponent countries. The vote was postponed until March 2020 so that member states could continue studying the benefits and risks of a reduction of cannabis control that would allow access to the plant for medical purposes. After this new session no agreement was reached either since many of the countries that participated in the vote did not have a clear position on the issue yet.

The 2030 Agenda for Sustainable Development is an action plan that arises from the commitment of the United Nations member states, which main objective is to protect the people and the planet and ensure prosperity, uniting the international community around to the slogan “Leave No One Behind”, thus urging the Commission on Narcotic Drugs and member states to “guide global and national drug policies towards the development, health and well-being of affected communities and drug users”. 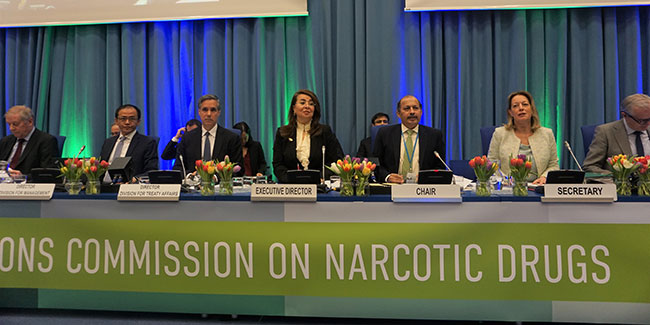 The Spanish Agency of Medicines has always referred to the World Health Organization (WHO) criteria to establish its position on the legalization of the substance. The only Spanish non-governmental organization that participated with voice in the plenary sessions of the CND that began last 2-4 December, the European Observatory for the Consumption and Cultivation of Cannabis (or OECCC for its Spanish acronym), made a statement denouncing “the failure of prohibitionist policies” after nearly a century of control of cannabis with no research to support this strategy or identify the hazards. According to the organization, this is adversely affecting human rights and people’s health, and that is why it becomes absolutely necessary to implement changes as proposed by the WHO. This historic change and new approach in international conventions on the world’s most widely used drug has generated much debate in the Commission. Likewise, the multidisciplinary group of experts that makes up this UN body does not expect significant progress. “Rumors – declared the OECCC president, Carola Pérez – suggest that THC preparations will continue to be controlled, maybe in a least restrictive way than it is now, while CBD preparations will be more strictly controlled. The latter is an absurdity, since CBD, although it is found in cannabis, does not have any psychotropic effect or create dependency or abuse. This would be like proposing the control of resveratrol, an antioxidant present in grapes, because you can get a narcotic drug from the grape: ethanol”.

Daniela Bagozzi, WHO spokesperson, explained that the recommendation is based on scientific evidence of the medical benefits of cannabis. She also added: “The WHO Committee recommended reducing the control of cannabis and related compounds to ensure that patients who may need a treatment can access to approved therapies”. “A lower control would allow more scientific research on the potential medical uses of this substance. At the same time, the new recommended level of control would ensure sufficient and adequate restrictions to protect against harmful use”, she added.

The recommendation of the WHO Expert Committee on Drug Dependence (ECDD), in a first study dedicated to cannabis since the organization was founded in 1949, was to eliminate this plant from List IV, which is the most restrictive and includes substances such as heroin, also under international control due to its highly addictive nature but accessible with medical supervision, to include it on List I, that applies a lighter control on substances and facilitates the access for medical, scientific and pharmaceutical uses, and such is the case of morphine. In addition, the study to recommended to withdraw from international control one of the key therapeutic cannabis components, cannabidiol (CBD), a substance already used in some drugs, tinctures and extracts.

Kenzi Riboulet-Zemouli, an expert in international cannabis policies, has already attended six annual meetings of the Commission on Narcotic Drugs, has opened a website to monitor the positions of all the participating countries in the recently concluded 63rd session, grouped into five geographic areas: Latin America and the Caribbean, Africa, Asia and the Pacific, Eastern and Western Europe, which included the EU, US, UK, Canada and Australia. Tom Blickman, an analyst at the Transnational Institute (TNI), sees in this series of postponements yet another proof of an international drug control system that is increasingly fragmented and in which it is very difficult to get a minimum agreement, even when it is time to make decisions based on scientific criteria.

If passed, it will be one of the most important changes on international drug policies in the last sixty years. Spain’s position should not differ from that of the rest of the EU countries. Even more when the WHO considers that cannabis should be still included in the list of narcotic drugs but at a control level that still guarantees protection against any eventual health hazard that could be caused by its consumption and also facilitates access to preparations made with this plant for both medical use and scientific research. Actually, clinical data have already shown the therapeutic potential of cannabis when used for treatment of pain and other medical conditions, such as epilepsy or spasms caused by multiple sclerosis, among others.

“It’s all about the ratios” Paul Hornby

Also recreational users of cannabis seek the medical effects of the plant, says pioneering scientist Paul Hornby in an exclusive interview with YWS. Thus it is senseless to differentiate into groups of consumers. His ...