The UN Commission on Narcotic Drugs (CND) has once again postponed the decision to lower cannabis control until December of this year. Based on the recommendation made by the World Health Organization in October 2018, the decision would mean removing the plant from Schedule IV of the most dangerous substances (which also includes heroin) and facilitating medicinal use of it. The topic had already been on the agenda for the meeting that took place in April 2019. With Russia at the forefront of the opposition countries, there was no agreement and it was moved to March 2020 to continue studying the benefits and dangers of the reduction in cannabis control. However, there was no agreement at this new meeting either and, above all, many countries that will participate in the vote continue without a clear stance.

The CND is made up of 53 UN member countries, which are chosen every four years by the Economic and Social Council of the supranational body. It includes eleven countries from Africa, eleven from Asia, ten from Latin America and the Caribbean, six from Eastern Europe and 14 others from Western Europe and other States [with one more seat rotating between the Asian, and the Latin American and Caribbean states every four years]. In addition to Spain, there are large cannabis producers among these countries (such as Morocco, Afghanistan and Egypt), some of the leading countries in the regularisation of the plant (such as Canada and Uruguay), but also several of the hardest blocks in terms of legislation on psychotropic substances (such as China and Russia).

“I don’t know” and “No comment” is the majority’s position so far, with more than 31 states that have not taken a stance on the WHO’s proposal according to the monitoring website of Kenzi Riboulet-Zemouli, expert on international cannabis policies. However, among those countries that have not made their stance public are Brazil, Ecuador, Peru, Chile, Australia and Switzerland, all of them with approved laws on medicinal cannabis. Also included is Mexico, which is currently in the process of legalising marijuana for recreational use.

The countries in favour

In February, the European Commission proposed that the 12 European countries that are part of the CND (Austria, Belgium, Croatia, the Czech Republic, France, Germany, Hungary, Italy, the Netherlands, Poland, Spain and Sweden) voted in favour of removing cannabis from Schedule IV – reserved for the most harmful substances which are not even allowed to be used for medical purposes – to include it in Schedule I, which does consider its possible therapeutic use. Although the Spanish Government has not declared how it will vote, it is expected to be in line with the European proposal. 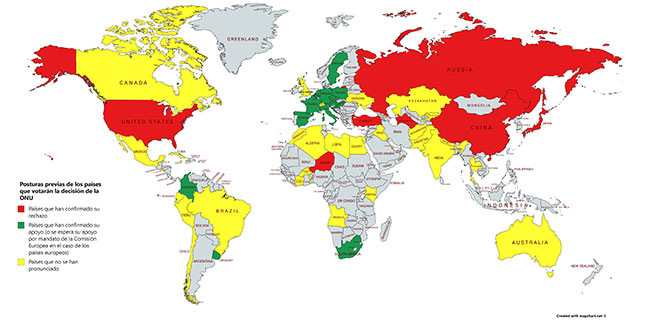 The only country that has so far confirmed its support for lowering control over cannabis before the UN is South Africa, highlighting the fact that its government has been “attentive to these recommendations” (referring to those made in 2018 by the WHO) and that “it will continue to work with the member states to reach a friendly mutual solution.” With a law passed in September 2018 that was based on a ruling by the Western Cape Division of the South African Supreme Court (which declared in 2017 that any law penalising the private use of cannabis as unconstitutional), South Africa was the first African state not only to approve medicinal cannabis but also cannabis for recreational use.

So far, six countries have announced their total or partial rejection of the proposal. China refuses to accept literally “any form of relaxation of controls on cannabis and cannabis-related substances,” stressing that this plant is “extremely harmful to society.” The Chinese Government said in its statement to the UN that “Any tendency towards loosening controls or legalisation would dramatically increase the extent of cannabis abuse, and jeopardise drug control efforts in other countries as well as globally.”

China’s outright rejection comes in spite of the tradition of using the plant in Chinese medicine and the fact that according to the British newspaper The Independent, companies in China amassed more than half of the patents on cannabis for medicinal use in 2014.

Japan is another country that has also announced its rejection – although with undertones. It has been precisely one of the countries to demand that the vote be postponed. For the time being, this country does not trust evidence regarding the efficacy of medicinal cannabis and fears the impact on public perception of a change in control over it. For its part, Nigeria maintains that the “WHO has not satisfactorily addressed the issues raised with respect to the recommendations on cannabis and cannabis-related substances.” According to a report in The Guardian, many doctors already prescribe cannabis for their patients, and up to 10% of the adult population uses marijuana in this African country where no regulation on medical cannabis has been approved, and which will be part of the commission that will vote to decrease control over cannabis until 2023.

Russia is another country that flatly rejects the WHO’s recommendations, stating that they would “indirectly encourage liberal experiments regarding the total or partial legalisation of recreational use of marijuana in several countries, violating its obligations under international drugs control conventions.” He also points out that removing cannabis and resin from list IV of the 1961 Convention would be perceived as “this drug is harmless” by society, and especially by young people. 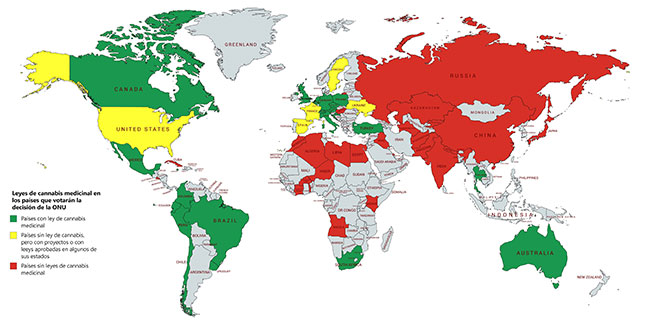 Turkey, a country where there are cannabis-based products for medical use, has also said “no” to each of the voting points on cannabis, merely stating that “cannabis is not an irreplaceable substance for medical purposes.” Also rejecting the WHO’s recommendations, Turkmenistan’s argument is much more concise: “The elimination of cannabis and cannabis-related substances from the 1961 Convention is considered by the Turkmen Government to be inappropriate.”

Finally, the United States have also been pushing for the vote to be moved to December and, in their statement to the CND, they have reiterated the importance of all the countries making a joint decision that takes into account the context of each one of them. Up to eleven states in this country have already passed laws regulating medical cannabis and Bernie Sanders, a possible candidate for the Democrats in the next presidential election (which will take place in November), has already promised that the legalisation of cannabis will be among his policy priorities if he succeeds in getting to the White House.

What is PTSD? Post-traumatic stress disorder (PTSD) results from exposure to a traumatic event which evoked fear, helplessness and horror. PTSD is often manifested as the combination of 3 types ...