Pain in the eye? Pain perception is a critical self-defence mechanism for the body. It tells us to steer clear of adverse stimuli — think of a hand over a flame. Ocular pain, a source of acute discomfort, may be a signal  that prevents damage to the eye (from exposure to a noxious chemical or a mechanical probe, for example).

However, in aberrant conditions pain signalling (nociception) can become dysfunctional. Prolonged impulses of pain will cause the nervous system to lock into a hyper-sensitized mode. This is referred to as neuropathic pain, a chronic debilitating condition that affects 8% of the entire population in Western Countries. (1)

The cornea, the transparent lid over the iris, has one of the highest concentrations of sensory nerve endings in the body, which makes it extremely sensitive to touch, temperature and chemicals. Contact with the cornea triggers an involuntary reflex that closes the eyelid.

Injury to the cornea is often associated with hyperalgesia and corneal neuropathic pain (CNP). Hyperalgesia refers to a heightened sensitivity to pain, usually due to damaged nerve terminals and pain receptors.

Opioids and non-steroidal anti-inflammatory drugs are typically prescribed for peripheral neuropathy and pain related to spinal cord injuries. Given the poor efficacy and adverse side effects of these pharmaceuticals, medical scientists are investigating different options for neuropathic pain management, including cannabinoid therapies. (2)

We suggest you to read “Cannabinoids and chronic pain. What your drugstore does not want you to know” to understand better the role of inflammation, neuropathic pain & cannabinoids.

Plant cannabinoids and synthetic cannabinoids bind to cannabinoid receptors — CB1 and CB2 — that are highly localized in the skin and in brain regions involved in pain transmission and modulation (such as the dorsal root ganglia, spinal cord, thalamus, periaqueductal grey area, amygdala, and rostroventromedial medulla). Endogenous cannabinoids also activate these receptors, which collectively produce analgesia by reducing inflammation and by stimulating the release of endorphins, which act via mu-opioid receptors. (3, 4) 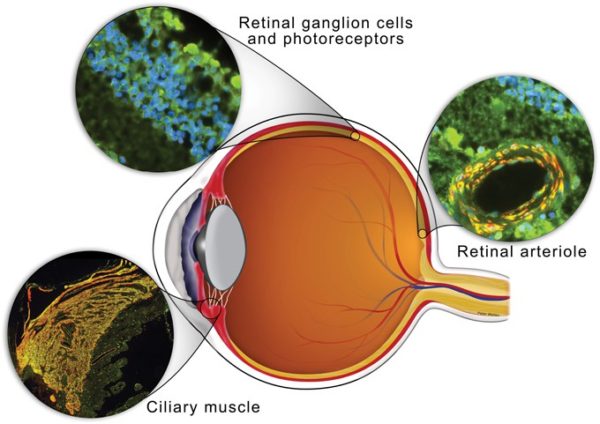 It is well established that activation of the Endocannabinoid system reduces pain sensation at central and peripheral levels. (5) If you want to learn more about this topic, why not saving this article for later: “Endocannabinoids are the body’s analgesic”.

CB1 and CB2 receptors are both involved in decreasing neuropathic pain and hyperalgesia. Given that corneal cells express CB1 and CB2 receptors, scientists at Dalhousie University in Halifax (Canada) have investigated whether stimulating these receptors could also alleviate corneal pain. (6)

The Dalhousie experiments were conducted on animals, reproducing corneal neuropathic pain by cauterization (burning) and by application of chili pepper (capsaicin) onto the surface of the eyeball. The researchers showed that all the animals receiving CBD via topical application significantly reduced their pain as measured by the decreased rate of eye blinking. The probability of this being a random result was deemed to be less than 0.0001, which is the closest science gets to certainty.

The Canadian researchers also tested two synthetic CBD derivatives (“CBD-DMH” and “HU308”) in the same manner and found they were somewhat effective at relieving pain, but they were not as effective as cannabidiol. CBD was the ligand (receptor activator) that produced the most beneficial painkilling effects in this animal study. (6) 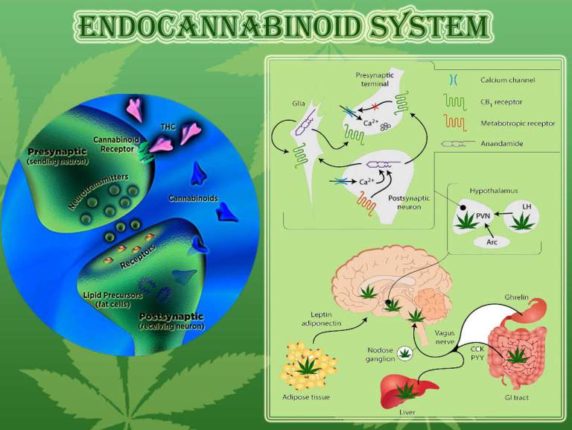 The scientists from Nova Scotia went further and repeated the same experimental model involving painful chili sprayed on the eyes of mice. But the second round of tests utilized mice that had been genetically modified so that they lacked CB2 receptors. Cannabidiol and the synthetic CBD derivatives were administered to the genetically modified mice without CB2 receptors to see how they responded to induced cornel pain. (6)

The results were different from the first test in two key ways:

1) CBD had an analgesic effect on the eyes of the CB2-deleted animals, but CBD’s painkilling effect wasn’t as pronounced as it was with the first group of mice that responded favourably to CBD treatment for induced corneal pain;

2) the synthetic CBD derivatives failed to elicit any painkilling response in the genetically modified mice. Based on these results, the scientists concluded that CBD and, to a lesser extent, its synthetic derivatives can reduce pain at the cornea by activating CB2 receptors. They also determined that the analgesic effects of CBD are mediated only in part by CB2 receptors, and that other receptors (or receptor-independent pathways) must also be involved in mediating the notable painkilling properties of CBD.

Cannabinoids in the eye

The use of natural or synthetic cannabinoid extracts is challenging for topical application due their highly lipophilic profile, which makes it difficult to dissolve cannabis oil formulations in water. Oil and water simply don’t mix well. This problem is particularly relevant with respect to cannabinoid-infused eye drop solutions, which must penetrate the watery, tear layer over the cornea in order to function at the eye.

Since the mid-1970s, smoked THC-rich cannabis has proven beneficial for lowering intraocular pressure and relieving symptoms of glaucoma. But the development of cannabinoid-infused eye drops would stall because of the lipid factor.

A few approaches were proposed to overcome this challenge. Initially these involved the use of light mineral oil as a vehicle. Low concentrations of THC (0.1%) were dissolved in light mineral oil and applied directly to the eyes of human subjects with high blood pressure. This caused a decrease in systolic blood pressure (pressure in blood vessels felt immediately when the heart contracts and pumps), which can reduce intraocular pressure. But ultimately the diluted THC-infused mineral oil proved to be an irritant to the human eye, which precluded its use as an anti-inflammatory remedy. (7, 8)

More recently, different micro-emulsions and cyclodextrins (cyclic sugar molecules) have been shown to enhance the corneal penetration of endogenous cannabinoids. These formulations were tested for their ability to lower intraocular pressure – with successful results. (9) Perhaps a similar solution could be utilized to deliver CBD and other plant cannabinoids as a treatment for corneal neuropathic pain.

Given the efficacy of cannabidiol in preclinical research, as well as its stellar safety profile, it would behove medical researchers to pursue additional studies on CBD eye drops. Moreover, this effort should be expanded to include whole plant extracts with THC, as well as CBD. Hopefully, cannabis-infused eye drops will soon be available for those who wish to avail themselves of the benefits of a novel form of medical marijuana.

This article has been edited & published by Martin Lee on ProjectCBD