Berlin, German capital with a population of more than 3.5 million, witnessed its 21st Hanfparade this past Saturday – a peaceful gathering of cannabis supporters who marched through the city centre and demanded nothing less than a full legalization of this plant.

What could you see when you arrived at Berlin’s Central Train Station on Saturday 12th? A lot of reggae vibes, cannabis-themed banners and clothes everywhere, sweet odour of burnt herb emanating from hundreds of joints and more than ten-thousand strong crowd of Germans, who are fed up with current prohibition and unjust drug laws.

Germany Is Falling in Love with Cannabis

Twenty percent of German teenagers aged between 15 and 17 tried cannabis at least once, according to latest reports, and this number is even higher among young adults (18–24 yrs.) – 50 percent. And what is more important – Germany finally legalized medical cannabis this spring, effectively helping make the plant even more popular in the eyes of general public (although medical cannabis itself is still widely unavailable for most of German patients who could benefit from it). This is also why the main theme of this year’s Hanfparade was “cannabis as medicine”. The organizers expected that a great number of patients from all across the country would turn up in Berlin and share their experiences with treating their ailments with their own illegally grown cannabis and products made from it. And they appeared in large numbers. “The vast majority of these patients are very unhappy with the current state of things,” explains Martin Steldinger, one of the lead organizers.

The march began at 2 PM next to the main railway station and ended at 4 PM in Spandauer street nearby Alexanderplatz (main square and transport hub in central part of Berlin), where there were be information stalls, speeches, music and other entertainment until 10 PM, followed by parties in various clubs. 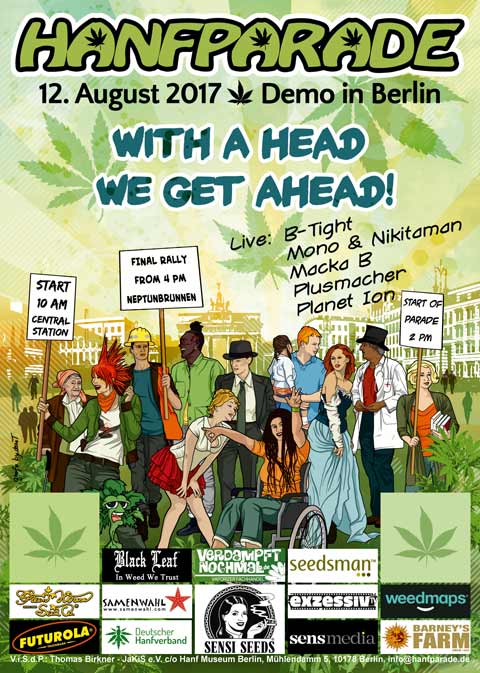 Medical cannabis is technically legal since March when the draft bill submitted by the health minister Hermann Gröhe became law, yet there is a catch: It will take many months before the first German medical cannabis (or from other countries, provided the growers win the tender of Germany’s Ministry of Health) is grown and standardized so that it can be prescribed to patients. Until then, only a very limited amount of medical cannabis imported from Holland will be available. There is also the omnipresent issue concerning a lack of well-informed and educated doctors who are willing and want to prescribe this herbal medicine. But that’s an issue every country who has just established medical cannabis program is facing.

Almost 60 percent of drug related crimes in German capital account for cannabis. There is a famous Kreuzberg district whose councilmen (mainly from the Green Party, but also from Social Democrats and Left Party) are presenting proposals now and then aiming to cut off the black market by partial legalization measures. In 2016 they agreed on a “controlled distribution of cannabis to adults” project, according to Deutsche Welle.

However, these pilot projects are still contrary to the German federal laws concerning drugs and drug use, and until these laws are changed, we can’t expect any broader legalization in the most populous European country.

October 17 is the day, folks! Canada will be the second country to federally legalize cannabis, and tokers everywhere will enjoy an extra special vacation destination! Because Canada has provinces and territories, when you ...

Everything ready for Spannabis 2022

Everyone’s looking forward to Spannabis! The greatest cannabis fair in Spain and Europe is finally reopening its doors in Barcelona on 11th-13th March, after having been cancelled for the past two years due to ...