Cynthia Nixon, better known as Miranda Hobbs, the character she played in the series Sex and The City for six series, is standing for governor of New York State. Since March of 2018, when she announced her candidature, it has become normal to see many well known characters from the world of cinema and entertainment on her Instagram page supporting her program. Two of these are the goddesses of comedy Abbi Jacobson and Llana Glazer, creators of the series Broad City. 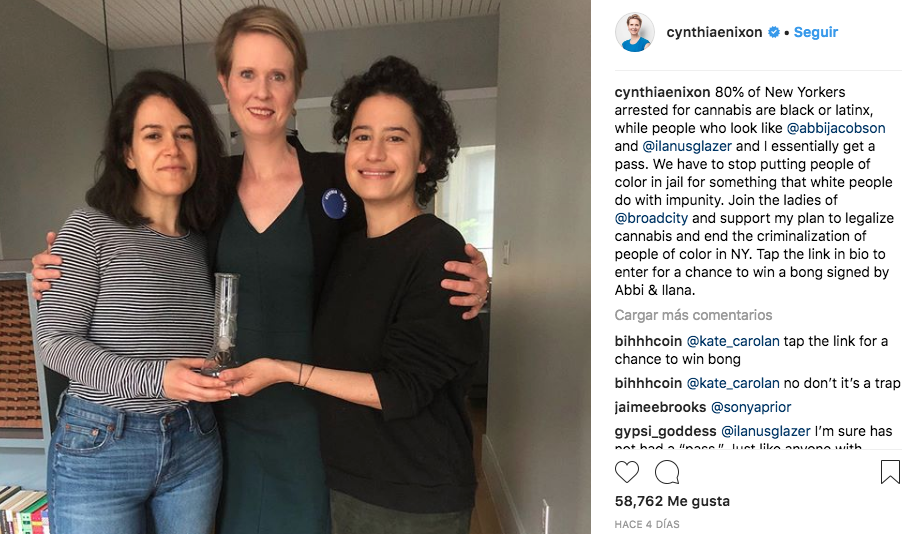 If you have seen Broad City, you will know that, as well as bring one of the best comedy series currently airing, its cannabis activism is pretty powerful. marijuana is present throughout the plots, and every episode of its four seasons. Unlike the other series developed in new York, in which its young characters live comfortably (think of Girls, the series by Lena Durham), Abbi and Llana perform true juggling tricks to reach the end of the month and pay all of the bills.

Sometimes they survive combining several jobs at the same time, which they find through temporary job agencies. Many if these jobs are surreal, like the time they end up cleaning the house of a pervert in their underwear,and at the end are not paid a single dollar. However, no matter how desperate and precarious their situation, there is one thing that is never missing from their daily videos – cannabis. 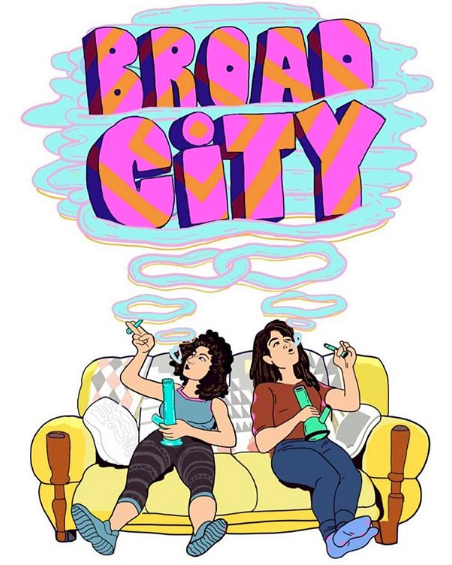 A few days ago Cynthia Nixon shared a photo on Instagram in the fine company of these two American comedians, actors and writers: Abbi Jacobson and Llana Glazer. In this post, the three stated the need to end the criminalization of people of colour in New York. “Racialized citizens are detained in the US more often than white people. This is a reality, which is even documented in many studies that show that the police in this country are more likely to detain Hispanic and Afro American citizens.

“ 80% of the people arrested for cannabis are black or latino, whilst people who look like  Abbi Jacobson, Llana Glazer or myself essentially get a pass. We have to stop putting people of colour in jail for something that white people do with impunity. Join the ladies of Broad City and support my plan to legalize cannabis and stop the criminalization of people of color in NY. Tap the link in my bio for the chance to win a bong signed by Abbi and Llana”

The actress has placed the legalization of recreational cannabis in the state of New York at the center of her campaign as a racial issue. She has declared that now is the time to legalise the plant recreationally, just as they have already done in eight other states such as Colorado, California and Washington D.C. “Cannabis is the jewel in the crown of the racist war against drugs and we have to end this”

In a video that was published at the start of her campaign she declared “ there are many good reasons to legalize marijuana, but for me it all comes down to this: we have to stop putting people of color in jail for something white people do  with impunity” she also the explained that “ the consequences accompany these people for the rest of their lives, making it difficult to access work and housing, and for people without nationality putting them in the spotlight for deportation”

Another of the motives she gives for regulation is that, through these taxes, million of dollars would be generated in taxes for the citizens and it would create important agricultural opportunities for the state of New York. Cynthia Dixon finishes this video saying that “for white people, the use of marijuana has been legal for a long time. Isn’t it time to legalize it for everybody else?

Berlin, German capital with a population of more than 3.5 million, witnessed its 21st Hanfparade this past Saturday – a peaceful gathering of cannabis supporters who marched through the city centre and demanded nothing less ...