2016 has been a monumental year for cannabis. If the recent election results from the United States are any indication – cannabis prohibition is being dismantled at its core. One in five Americans now lives where cannabis is legal. Eight states now allow the adult possession and use of Marijuana. There are only six states within the United States where no form of marijuana is legal. Clearly, the times are a changing. Here are 10 signs the cannabis movement is gaining momentum in the U.S.

In January, Colorado was home to the first ever Cannabis Wedding Expo. Featuring over 20 different vendors, the event showcased everything from cannabis-infused edible companies to stunning bud bouquets. Love and Marij – an upscale cannabis wedding and event planning company, hosted the expo. Offering a place for cannabis friendly companies to connect with weed-friendly vendors, the event was a huge success. Attracting the attention of media and newlyweds alike, the expo marked a significant step for the cannabis community. 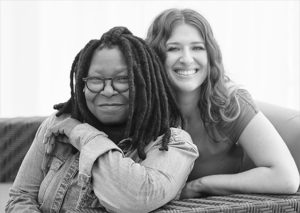 Comedian and actress Whoopi Goldberg became yet another celebrity to endorse the marijuana movement when she launched her company in April. Teaming up with Maya Elisabeth, owner of OM Edibles, Whoopi aimed to create cannabis-infused products for women. The company, Whoopi & Maya, is a line of medical cannabis products designed for relieving menstrual discomfort. Currently, the company offers four products – a balm, tincture, bath soak, and chocolate. These products are now available in dispensaries across California.

It was nearly two years ago when Alaska voted to approve recreational cannabis stores. In October, a historic moment took place when the first retail cannabis store opened in Valdez. Herbal Outfitters officially welcomed its first round of customers on a Saturday afternoon this fall. The event attracted people from across the state. While Herbal Outfitters was the first store to open, two more stores in Fairbanks quickly followed suit. 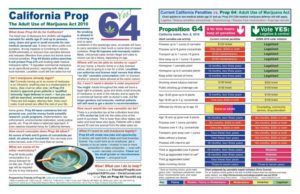 Proposition 64, otherwise known as the Adult Use of Marijuana Act, was approved after voters submitted their ballots on November 8, 2016. Under this measure, adults will now be able to possess and consume cannabis for recreational purposes. In fact, adults can possess up to one ounce of marijuana along with grow up to six plants in public view. The measure also created two new taxes – one for retail and one for cultivation. The news came as a huge relief to countless residents and visitors of the state. In addition, California judges are now setting the records straight for those with pending pot crimes. While the approval of Proposition 64 will certainly not lead to changes overnight, it is a monumental victory for the cannabis community worldwide.

California was not the only state to take a step towards a greener future. Question 1, allowing adults 21 and over to possess and consume up to 2.5 ounces of marijuana, passed in Maine. The measure also states that 40 percent of cultivation licenses must go to small-scale farmers. This was great news for farmers who feared they might not be able to compete with large-scale operations. In addition, the measure also approved cannabis social clubs. In fact, Maine was the first and only state to approve this measure.

It was a close race leading up the final results but Question 4 passed in Massachusetts. The measure allows people 21 and older to possess and grow cannabis. In fact, the measure specified that people could possess up to one ounce of cannabis in public and up to 10 ounces at home. This is great news for those who need larger doses of their medication without fear of retribution. In addition, Question 4 also created the Cannabis Control Commission who will oversee legalization and licensees of those who wish to sell cannabis-infused products.

Sin City, aka Las Vegas, already attracts thousands of visitors from across the globe. However, there will soon be far more than gambling in this infamous desert oasis. Question 2 passed in Nevada, which allows adults over the age of 21 to purchase, cultivate, and consume cannabis. Interestingly enough, the measure also allows for those who don’t live within 25 miles of a retail store to grow up to six plants within an enclosed and locked area. The measure also creates a 15 percent tax to be paid by licensed cultivators. The funds will be used to support regulation as well as public education – great news for Nevada residents.

In November, Green Flower Media announced the launch of the first “Netflix” of cannabis education. Working with the world’s top cannabis experts such as Steve DeAngelo, Amanda Reiman, and Mara Gordon, the cannabis media company aims to provide an online library and community of credible cannabis courses. Available to anyone, anywhere – Green Flower provides unlimited cannabis classes at consumers’ fingertips. Best of all, the media company announced new courses will be added every week.

The month of November has been monumental for the cannabis community. Denver voters approved the Prop 300 law – allowing bars and restaurants to give patrons the option to use cannabis. The measure is the first in the nation allowing public consumption alongside a drink or meal. While the measure comes with a catch (smoking must be outside) it is a sure sign of society’s increasing tolerance towards cannabis.

There are clear strides being made for cannabis policy reform in the United States. While President-elect Trump leaves many wondering what will happen at the federal level, if there is one thing that is clear, the people have spoken. People are increasingly becoming not only tolerant towards cannabis but also favorable.

Which begs the question – what will 2017 bring?

Top 5 of bizarre accessories for your weed!

Now that weed is legal for consumer use in many states and countries such as Uruguay or Argentina, with more countries soon to come. So it opens a new door to a whole “weed market” ...