With the 2016 election only days away, NORML is pleased today to release of our first ever Gubernatorial Scorecard. Inspired by NORML’s Congressional Scorecard, this extensive database assigns a letter grade ‘A’ through ‘F’ to every state governor based upon his or her comments and voting records specific to matters of marijuana policy.

Public opinion in support of marijuana law reform is at an all-time high. Nonetheless, few federal lawmakers are espousing views on cannabis policy that comport with those of the majority of their constituents. As a result, most legislative activity specific to marijuana policy is taking place at the state level. America’s governors are our nation’s most powerful, state-elected officials and they therefore play a key role in this ongoing legislative debate. NORML’s new Scorecard provides voters in all 50 states with pertinent information regarding where their governor stands on issues surrounding cannabis policy. 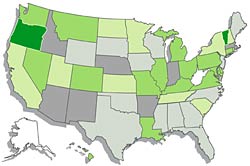 Similar to the findings of NORML’s Congressional Scorecard, this gubernatorial analysis affirms that voters’ views on marijuana policy are typically more progressive than the views held by the highest elected officials in their states — 56 percent of whom received a passing grade from NORML. For example, while sixty percent of Americans support legalizing the use and sale of cannabis for adults, only four percent of state governors voice support for this position. Governors overall are also far less supportive of legislation to legalize the medical use of cannabis than are their constituents – approximately 80 percent of whom back these type of reform measures.

Also evident is that gubernatorial support for marijuana law reform falls primarily upon partisan lines. While over 94 percent of Democratic governors received a passing grade of ‘C’ or higher (one Democrat received no grade), fewer than 40 percent of Republican governors did so. Further, all of the governors who received either a ‘D’ or a failing grade from NORML are Republicans. Conversely, both of the governors who received a ‘A’ grade from NORML are Democrats. This partisanship lies largely in contrast to voters’ sentiments, as the public tends to view many aspects of marijuana law reform, such as the regulation of medicinal cannabis, as non-partisan issues. 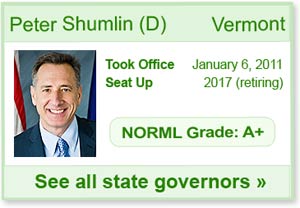 Commenting on the report’s findings, NORML Deputy Director Paul Armentano said: “It is apparent that voters’ views regarding marijuana policy have evolved significantly over the past decades. Yet, the positions of their governors have not progressed in a similar manner. Constituents ought to demand that their lawmakers legislate on behalf of policies that more closely reflect marijuana’s rapidly changing legal and cultural status.”

To read how NORML’s grades were calculated and to review the individual profiles for the governors of all 50 states, please visit: http://norml.org/us-governors.