After many years of work by the  R & D team at the Kannabia Seed Company and exhaustive tests and trials, we have finally decided to introduce to our catalogue a new strain, Purple Kush (Black Domina x Purple Kush).

This introduction has been warmly welcomed by our esteemed growers, especially those in North America, so we wanted to take this opportunity to explain the origins of Kush, as well as the reasons why this strain is so popular in some markets.

As its name reveals, this plant originates in the Hindu Kush mountain chain, between Afghanistan and North West Pakistan. This is a formidable mountainous region, and this strain is perfectly adapted as it is highly resistant to drought and arid conditions. In fact many theories suggest that this was the region where cannabis originated and that Hindu Kush, therefore, was the original cannabis strain, before the plant appeared in other areas, with different features.

Normally, these are bush-type plants, short and with few branches. Due to the harsh conditions of its natural environment, the flowers ripen quickly, compared to other cannabis strains.

A common feature of Hindu Kush plants, is that the buds take on a purple colour, especially in cold climates and during the ripening of the plant.

This strain is a great resin producer, and has been traditionally been used for hash production. 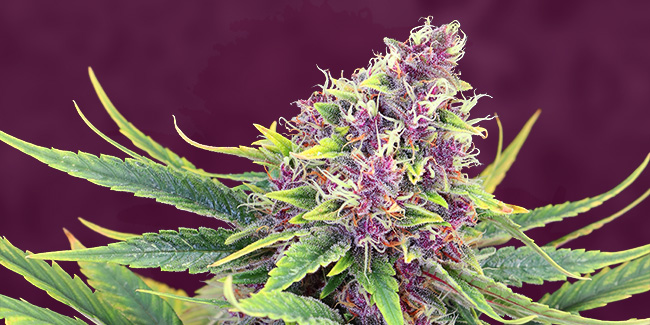 The effect of this variety is mainly relaxing, sedative and can ease headaches, migraine and stress.

The history of this genus goes back many centuries, but its popularity in the Western world began in the 60’s and 70’s, when some purist growers took some seeds to the USA.

In the meanwhile, this strain has been crossed with other strains in order to ensure adaption to different climates.

From Kannabia Seed Company, we present you this hybrid, crossed with one of our favourite parent strains: Black Domina.

We are certain that followers and enthusiasts of Kush strains will not be disappointed with our feminized Purple Kush.