These are historic days for pain relief in Chile. Foundation Daya, regular collaborator of Kannabia, and other associations such as Mamá Cultiva, have written an important page in the book of Chilean Cannabis. On March 26th, The Honourable Chamber of Deputies passed with a majority vote, the home cultivation of medicinal cannabis, in the absence of some indicators.

Despite the actual legislation of each country on cannabis regulation, the rights of patients always end up compromised for a multitude of reasons. Having to resort to the black market; drawing attention to yourself in public places and being obliged to explain your entire history without any privacy, or hiding yourself away and fearfully growing your plants for your own treatment or those of underage members of your family….

Secure Growing Law, the modification of the Chilean Sanitary Code

The Daya Foundation and other associations such as Mamá Cultiva know this situation very well as they have been helping patients directly for many years. For this reason they proposed the modification of the Chilean Sanitary Code, in a form that would protect people that are constantly persecuted and whose rights they see violated without any regard.

The proposal of these collectives was that the medical prescription should be directly the plantation, cultivation and harvesting of plants by the patients, without fear of being arrested or of the plantation being impounded. This project, named #LeyCultivoSeguro, which has been being discussed since January, was passed unanimously by the House Health Committee after the president of the Chamber of Deputies, Maya Fernández accepted the petition.

The modification of the Sanitary Code had the total commitment of Frente Amplio (Broad Front), a political coalition composing of political movements and parties from the left and the public. They also had the support of deputies from Nueva Mayoria (New Majority), formed of parties from the left and centre-left wing, and from a large number of parliamentary representatives from Chile Vamos (Go Chile) from the centre, centre-right and right wing. And of course the support of the Chilean people who ensured that #LeyCultivaSeguro was a trending topic on Twitter.

There was a lot at stake, years of work and the pain of many patients and their families. “We hope that the deputies comply with the commitment of this project and finally we can guarantee the rights of thousands of patients who today use cannabis as a fundamental part of their treatment”, expressed Ana María Gazmuri, Executive Director of Foundation Daya.

For her part, from Mamá Cultiva, Paulina Boabadilla declared that many mothers had not found an effective alternative in traditional medicine, only in cannabis, “Today we say enough of the persecution and we await the approval of this modification to avoid the impounding of our plants, which are the only thing that brings relief to our pain” 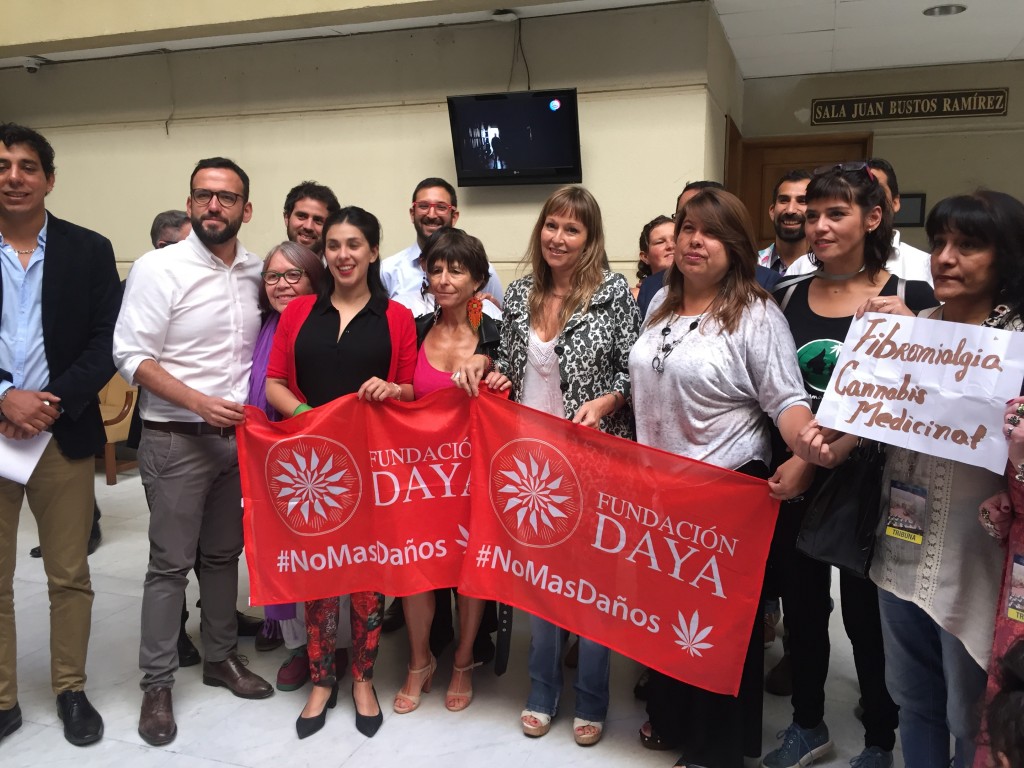 Health as a right, the end of the persecution

During the session of March 21st, the deputy Karol Cariola, main promoter of the regulation project, made it clear in a statement that the project was essential to protect the rights of mothers and of patients that need cannabis as a fundamental part of their treatment, Stressing that health was a right that was being violated. “We say this publicly because we deem it necessary that the authorities take action in this matter. On the one hand we are passing a bill of law with a majority, cross-party, in the Health Committee of the Chamber of Deputies, however, the persecution of mothers cultivating for medicinal purposes continues as if they were true criminals”.

Finally, on the 26th March, the chamber of deputies said yes, with an overwhelming majority to the Bill of Safe Cultivation with 103 votes in favor, 11 abstentions and only 1 vote against. This vote will be marked in the calendar symbolically, as it is also World Epilepsy Day, a condition of the nervous system that affects many children who have found an effective treatment in cannabis.

In Chile, from now on, a doctor can give a prescription which authorizes home cultivation of marijuana to patients that need it, as well as receiving protection in the case of detention or impounding. Just a couple of hours ago the image of the day was published, delivery of the first free units of Cannabidiol, the first phytopharmaceutical and grown and produced in Chile, made from 100% cannabis.

The struggle that Daya Foundation began in 2015 with one of the largest legal crops in America, has culminated in a great achievement. 2,500 people will receive free cannabis extracts for a year, the result of the 6,400 plants of this crop. Ana Maria Gazmuri, Executive Director of Fundación Daya and deputies Karol Cariola and Claudia Mix, delivered the first phytopharmaceuticals to the mayors of the 15 Chilean municipalities that participated in the plan for the cultivation and production of extracts through their health centers. Paulina Bobadilla, president of Mama Cultiva Chile, was the first person to receive medicine. This was undoubtedly a historic moment, the first totally official use of medicinal cannabis in Chile.

This Election Day in the United States will be also remembered as the day when four new states legalized cannabis for recreational use. Mississippi has done so for medical cannabis, and Oregon and ...

What are munchies? And how they do relate to cannabis? The munchies in slang, mean hunger, an special craving for sweets or snacks, suffering from the munchies. It comes from the English verb “to munch” ...