According to a study conducted in the USA in 2017, the millennial generation prefers cannabis over alcohol. This is what Heineken must have had in mind when creating their latest product called Hi-Fi Hops. It’s a marijuana beer that is already flying off the shelves of stores in California, as, due to including both THC and/or CBD, it can not be consumed or sold in bars, according to the current laws of the state.

What happens when the statistics indicate that the consumption of beer has decreased among a sector of millennials? And that these people opt for cannabis rather than alcohol? Well, the most prestigious brands take the opportunity to create a product that is more suited to the needs of people of this generation. Heineken is one of these companies with its new offering, Hi-Fi Hops.

Without alcohol, but intoxicating

Hi-Fi Hops, Heineken’s new product, is a marijuana beer and costs $8, or 7 euros. This high price has not prevented it from being in great demand in the stores of California where it is sold. Lagunitas is the Californian brand of Heineken, which is promoting this water drink with the gas luposolado, which does not produce a hangover.

And it is not a spirit, since it does not contain alcohol, however, they say that those drinking it  feel effects similar to those provided by cannabis. The reason why this beer makes us “drunk” is due to its composition, which offers two options. The first format, the most psychoactive, contains 10 mg of Tetrahydrocannabinol (THC). And the second variant available is hybrid, a little more balanced and soft, offering 5 mg of THC and 5 mg of Cannabidiol (CBD). 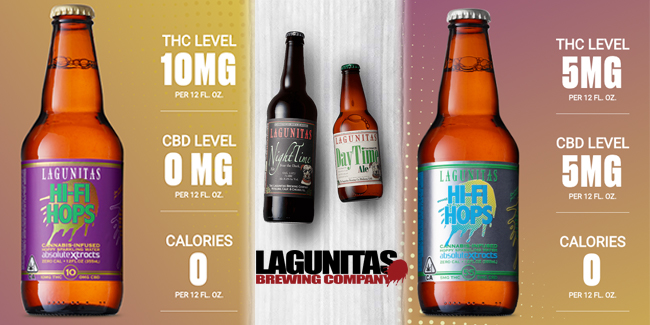 Up to date design

Another feature that makes Hi-Fi Hops a drink for today and, millennial, is its reusable format. This marijuana beer comes in a can with an unconventional closure, with a tab, which can be pressed and closed when sliding. So, if we don’t consume all the product at once, we can keep it for later or for another day.

Multinational consultants like Cowen & Co are interested in the future of the cannabis market. The US company has estimated in a study that the marijuana industry could exceed that of soft drinks in 2030, if the plant were legalized throughout the country. Which would give a turnover of 75,000 million dollars.

“We dreamed of hops and their cousin cannabis, partying together in a family gathering, we wanted to bring this party to life with a drink, it’s time for good beer to inspire a provocative and refreshing non-alcoholic alternative. With a pinch of California-grown cannabis in each sip “, this is the description they offer us of this sparkling drink inspired by an IPA beer from its website.

It seems that alcohol sales in the US have declined significantly in the last ten years. In the 2017 study quoted at the beginning of the article, the California OutCo company and the Monocle Research consultancy conducted a questionnaire on consumer habits of than 2,000 people in the state of California.

In these questionnaires they found an answer to this drop in the purchase of spirits. It seems that 51% of people surveyed between 18 and 29 years of age opt for cannabis rather than alcohol. Of these, 34% choose cannabis over beer, 18% prefer marijuana to wine; and 14% put the plant ahead of other types of alcoholic beverages.

Is the legalization of cannabis influencing the choice of recreational preferences for this sector of the millennial generation? Perhaps it is still too soon to know, but it seems that the normalization that the plant is experiencing globally is part of this trend. The drop in consumption of alcoholic beverages for a more natural and therapeutic option.

Legality of Cannabis in Greece

Hashish entered Greece for the first time  in the 19th century, as the War for Greek Independence began against the Ottoman empire. After the Greco-Turkish war, the population of Anatolia- more than one million ...

An absurd case of Czech hemp farmer Leopold Svatý, whose certified hemp had been seized by police two years ago during the cannabis tradeshow in the city of Ostrava, came to ...