It is popularly known that there is an intrinsic racism in every detention related to cannabis in the US. And is not just a popular belief, there is data to prove it. The mayor of New York, Bill de Blasio, has asked the NYPD to change their form of punishing people that consume marijuana in the street, because every arrest showed, in effect, a clear racial discrimination.

In May 2018, Bill de Blasio gave the NYPD a month to revise their practises when sanctioning people that consume marijuana in public. This news came out just after the publication of statistics revealing that there was racial discrimination in the arrests

86% of the people arrested in 2017 were black or Latino. This means that, if you are a racialized person in the US, you are eight times more likely to be detained for possession and use of cannabis. During that year year, 16,925 arrests were made for the possession or use of cannabis. Although the commissioner of the NYPD, James O’Neill declared that his policemen did not act following a “racial pattern”, he accepted that they had to review their policies.

I’m announcing today that the NYPD will overhaul its marijuana enforcement policies in the next 30 days. We must end unnecessary arrests and end disparity in enforcement.wrote Bill de Blasio on his Twitter account (@NYCMayor) on May 15th, 2018. 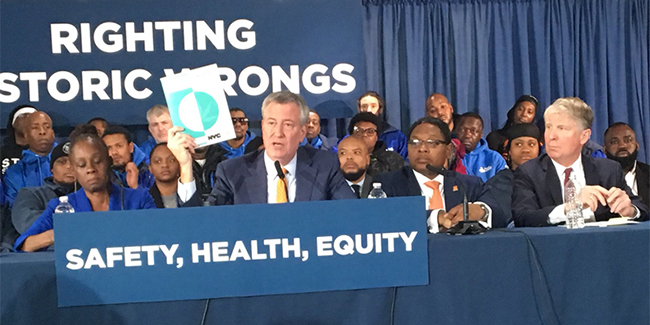 The reactions to his tweet were rapid and many people came to the same conclusion.

Nothing to cry victory about

As this measure came into force on September 1, the New York Police Department (NYPD) rushed to publish a tweet recalling that “Marijuana is still illegal in New York” and attached a video with the information that citizens needed to know until it became effective.

“Smoking in public or owning up to 25 grams can end up in a judicial summons, instead of arrest”, could be read in the aforementioned video. “People who smoke in public can still be arrested if they have an open order or are on probation and have a history of violence, as they are a threat to public safety.”

Less fines than in the past

A matter of social justice

Although the legalization of cannabis is a worldwide trend and is news that arouses general joy, there are activists who continue to point out that it is a measure that only the most privileged of this society will enjoy. We discussed this with the creator of Cannasexual, Ashley Manta, in an interview with YesWeSkunk.

“I believe that cannabis is an important issue of social justice. In the US, people of color are arrested and jailed disproportionately for cannabis-related offenses, while whites, because of their privilege, are subject to much lower arrest rates. There are a lot of rich white people, especially men, in the cannabis industry, who are getting richer, while people of color go to jail, “she told us.

That is why this Bill de Blasio measure, which came into force in September 2018, is so important. Just as it is that the governor of the state of New York has taken a step forward in the recreational legalization of cannabis, proposing to reduce the criminalization that affects racialized communities.

Cannabis extracts significantly improved epilepsy in about a quarter of patients

About a quarter of children and adolescents profited from a treatment with oral cannabis extracts. This is the result of a retrospective chart review of 119 patients of the Children’s Hospital Colorado of the University ...