Today, the decision to legalize the self-consumption and homegrown of medicinal cannabis in Paraguay is in the hands of its president, Mario Abdo Benitez. Last August, the Chamber of Deputies of this South American nation, which initially rejected the proposal, did not gather a majority of votes to get the rejection of the bill passed. The draft law was thus approved by the Senate and now its fate will be decided by the Paraguayan executive.

The proposed bill that is on the President’s table includes, on the one hand, the modification of article 30 of Law 1340/1988 on illicit traffic in narcotic drugs, so that the possession of cannabis with medical purposes should not be punishable. On the other hand, the reform also includes the modification of article 33 of the same law in order to decriminalize the growing, cultivation, harvesting and processing of marijuana plants when the individual or legal representative performs these activities in a property authorized by the National Anti-Drug Secretariat (SENAD) and holds a medical certificate revised and validated by the Ministry of Public Health stating that the person suffers from a condition that is treatable with cannabis. 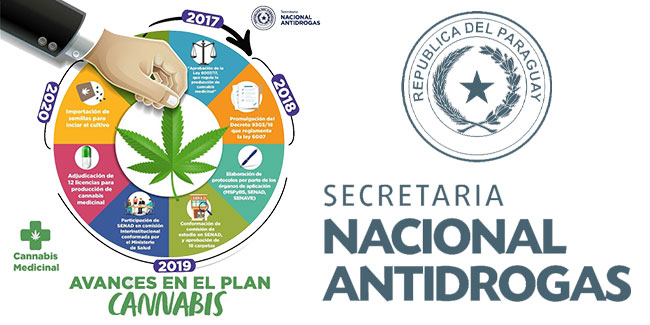 “The reason for this change is that we need to differentiate between a medical user and a drug trafficker. Actually, at the time being and according to the current law, we are all criminals,” declared Cynthia Farina, president of Mamá Cultiva Paraguay, when asked about the law that is being subject to modification.

This growers association is one of the key organizations that promoted the draft of the new bill. The new legislation yet to be approved by President Abdo will allow that “anyone who might need to use some type of cannabis therapy can have the guarantee that he or she will not to be persecuted by the anti-narcotics forces, the police or anyone,” adds Farina.

Mamá Cultiva Paraguay is an organization established in this country by Cynthia Farina with the support of the Daya Foundation based in Chile. Farina couldn’t find any effective treatment in conventional medicine that would work for her daughter, who suffers from refractory epilepsy and was six years old at the time. “We are mothers of children who have refractory epilepsy, cancer and other health conditions and who did not find answers in traditional medicine, so we decided to turn to alternative therapies with medical cannabis,” she explains on his Facebook profile.

The bill, if finally passed, would allow the consumption and homegrown of medicinal cannabis to any patient holding a medical prescription stating that the person presents a condition that can be treated with alternative cannabis therapies. If the individual meets these requirements, both the Ministry of Health and the National Anti-Drug Secretariat (SENAD) will issue a permit and include the patient in a registry of users so that national health authorities can keep a record and perform any eventual controls more effectively. All details regarding the type of cannabis and the quantities that can be grown still remain open to medical criteria.

As in Spain, the Paraguayan government has started this reform process not to protect consumers but to open the path to pharmaceutical companies. Law 6.007 was promulgated in 2017 and established several scientific research programs about medical use of cannabis and its derivatives. Last year, in September, the Paraguayan Ministry of Health opened a public bid as part of the process to select the companies and the number of production licenses that will be granted. Cannabis will then become a treatment option for selected patients nationwide and a breakthrough for the country’s pharmaceutical industry. Before this, prescription of medicinal cannabis was only intended for the treatment of cases of epilepsy and Parkinson disease that did not respond to conventional therapy. By February this year, the Ministry had already granted twelve licenses, one of them to Pharma Industries S.A., the Paraguayan subsidiary of the American pharmaceutical giant Abbot Laboratories. Another license was granted to Cannapar, also based in Paraguay, allowing the cultivation of an area of ​​200 hectares of land. Green Flower, a consortium made up of twelve partner companies, Swiss Pharma and the Paraguayan pharmaceutical company Comfar Saeca were also among the license winners.

Last Monday, February 11, was held in Madrid Cannabis-Europe forum, one of the most important global events in the cannabis industry. This year, the trade show has been held in Madrid ...