From roses to medical cannabis

Hope combined with uncertainty and skepticism. This is how the 246 workers that make up Aleia Roses feel, according to Miguel Ángel Brezmes, head of Industrial and Institutional Policy for the trade union Comisiones Obreras (CC. OO.) in the northern region of Castilla y León.

The company is located in the municipality of Garray in the province of Soria, with only 700 inhabitants, up until recently, was the largest rose greenhouse in Europe, with 14 hectares and more than eight years of experience. Currently, Aleia Roses is in the process of becoming a medical cannabis cultivation center. “It seems that there is clear and strong endorsement for this project; so far they have invested more than 10 million euros in adapting facilities to the new crop,” said Brezmes.

The owner of the company Aleia Roses, Luis Corella, who originally comes from Madrid, had just started a company in Mexico that will export tomatoes to the US. After returning back to Spain in 2013, he applied that same company model to export roses from Soria to Amsterdam. But the company filed for voluntary bankruptcy upon the Commercial Court of Soria in October 2019, despite having been granted a €10 million subsidy from the Junta de Castilla y León regional government.

In February 2020, the company laid off 47 of the 350 employees that made up its workforce and those who remained had to submit a temporary employment regulation file (ERTE) that has been in force since then. Javier Botín – one of the sons of Emilio Botín, president of Santander bank for 28 years – participated in the bid to purchase the company and lost 10 million paid as a surety since, shortly after, he withdrew his takeover offer. Two months later, the North American investment fund Full Moon finally bought the company for 6.2 million euros. This investment fund, based in North Carolina and specialized in the cannabis sector, will definitely change the direction the company shall take soon after their arrival.

“When people began to talk about the possibility of producing cannabis, which seemed to be considered taboo to talk about, Full Moon, the North American group appeared to be among the shortlisted companies to acquire the production unit”, recalls Brezmes. And the subject that was initially taboo quickly became official. “The jobs of these people was at stake; the risk was so high that the new management decided to uproot all the existing crops, even though the initial idea was to plan a long and gradual transition from roses to cannabis” explains Brezmes. The Spanish Agency for Medicines and Health Products (AEMPS) has already granted the necessary permits for the acquisition of the hemp seeds, although the content of this new license has not yet been published on its website, the information had been updated on August 13. “There is a good expectation, but the project is still in an embryonic stage” adds Brezmes. 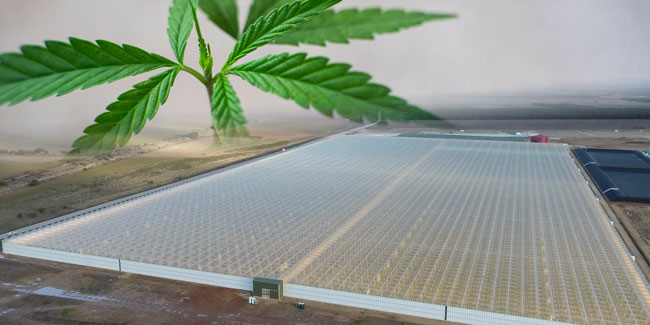 So far, according to the CCOO unionist, the company has not yet resumed its activity and the majority of the workers are still in ERTE, awaiting the completion of the adaptation works of the manufacturing facilities for the new crop, since the company is required to meet certain safety standards and conditions. The cannabis produced by this factory, with an initial allocation of three and a half hectares, according to recent reports from the trade union, will be used for medical purposes and the entire production will be destined for export.“Another thing is that it may return to Spain later in the form of manufactured products,” adds Brezmes in relation to the few cannabis-derived products that have obtained a marketing license in the country so far.

Nevertheless, what seem not to be changing are the working conditions of the company’s employees. As Brezmes points out, the conditions are still laid down by the same labor agreement in force when they cultivated roses, and they are substandard.

“Currently, there is not quality employment: people are earning the minimum wage. The working conditions are minimal, really bad”, says Brezmes. “The agreement is highly unsatisfactory since you need to consider the extremely hard work they perform in the greenhouses; let’s wait until the new activity takes hold but, if it starts becoming profitable, workers will also want a fair share of the cake,” he concluded.

We want to talk about a product that’s giving us a great deal of satisfaction: Swiss Dream Rosé Auto CBD genetics from Kannabia, one of the first and ...