Dr. Manuel Guzmán: « We already have a knowledge of the real therapeutic action of cannabis, which is indisputable »

As part of the review of the best moments of the III International Seminar of Medicinal Cannabis of Santiago de Chile organized by Daya Foundation, we bring you a summary of the presentation of Dr. Manuel Guzmán (Spain), researcher and professor of Biochemistry and Biology Molecular in the Complutense University of Madrid. Licentiate (1986) and Doctor (1990) in Biological Sciences from that university. At the end of the text, there is a video of the complete presentation.

« Cannabis is a group of molecules that act by mimicking the action of endogenous molecules, activating their receptors and replacing their action in disease situations, when those endogenous molecules are not functioning correctly. We already have, therefore, a knowledge of the real therapeutic actions of cannabis which is indisputable ».  (Dr. Manuel Guzmán) 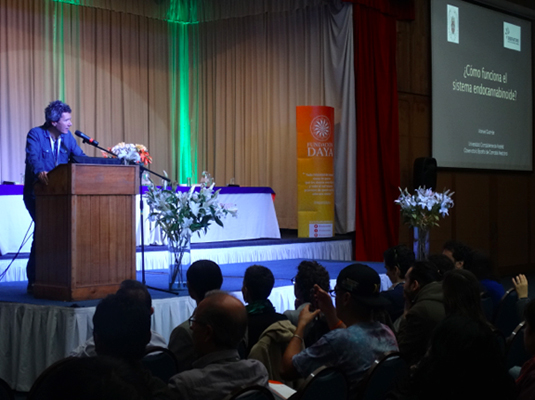 Dr. Manuel Guzmán (Spain) was the first of ten medical and scientific exhibitors to investigate and use the medicinal use of cannabis in their clinical practice . After highlighting the work of Fundación Daya, cataloging it as « truly exemplary and unique throughout the world, not only here in Latin America. A work that is spreading, irradiating in an exponential and exemplary way to other bordering countries« , making a counterpoint between the advances achieved in the region with the dissimilar reality of medicinal cannabis in different European countries, Dr. Guzmán began his exhibition entitled « How does the endocannabinoid system work?« , Whose main objective was to explain how cannabis acts in our body.

« A basic dogma in pharmacology, is that any substance, medicine or drug acts by the same mechanisms in our body. None does this by magic, essentially what these substances do is push our endogenous chemistry up or down, beyond what our body at that time can do », he explained by way of introduction. 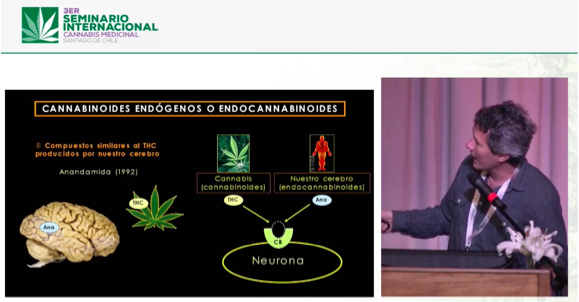 To exemplify this basic operation of pharmacology, he explained the case of a diabetic patient who must take insulin to aid the endogenous chemistry of the body, thus replacing or enhancing the action of that hormone. In the opposite case, for example, there are antihistamines that act by blocking the receptors of that hormone, which triggers the allergic reactions. Examples used as a way to introduce the operation of the chemical compounds of the cannabis plant in our organism:

After that, he briefly explained the process that led the Israeli chemist Raphael Mechoulam to characterize the chemical composition of this plant barely fifty-three years ago, although there are written records of its medicinal use dating back four thousand years. In his work, Mechoulam discovered that « the main pharmacologically active component of cannabis is THC »,  Dr. Guzmán said in his speech.

« Cannabis acts in a specific way in our body, and it does so because there are many cells in our body that on their surface, in their area of ​​contact with the external environment, can selectively recognize these molecules …. Cannabinoids, like any other pharmaceutical, like any other drug or medicine, act in the organism by imitating the action of endogenous molecules, either boosting their action or blocking it ».  (Dr. Manuel Guzmán)

« Cannabis has more than 100 molecules, exclusive to this plant, that modulate the action of THC. Among them, there are other cannabinoids such as CBD and CBN, which offer very interesting therapeutic possibilities, including the attenuation of seizures in refractory epilepsy. In addition, they allow a better tolerability of THC in joint preparations. CBD greatly mitigates the unwanted effects of the medical use of cannabis, such as motor coordination », he said in his speech.

« In summary, the first thing to learn is that cannabis is a very complex chemical entity. This allows us to tailor highly practical and appropriate therapies to the need of each patient, but it makes it difficult to standardize », he said, before advising that in its therapeutic use « The first thing we should think about is the patient’s illness, their individual situation, their general health status and how we can most precisely customize the type of cannabis for that particular patient ».

« Cannabinoids, like any other pharmaceutical, like any other drug or medicine, act in the organism by imitating the action of endogenous molecules, either boosting their action or blocking it »,  he explained ». Cannabis acts in a specific way in our body, and it does so because there are many cells in our body that on their surface, in their area of ​​contact with the external environment, can selectively recognize these molecules. Thus, these cells have molecules on their surface called cannabinoid receptors, which receive the THC molecules as a lock would a key ». 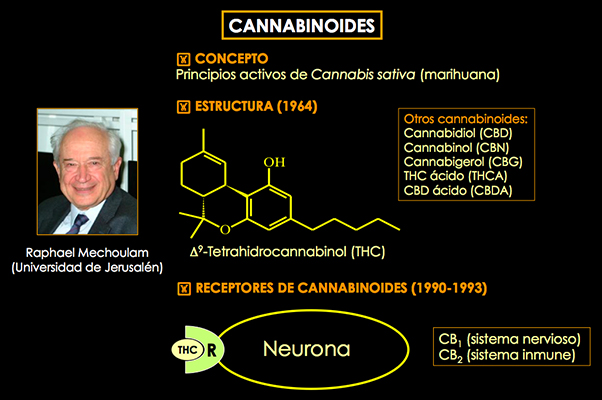 Speaking about THC, he explained « this molecule is received by our neurons and by many other cells of the body, through another molecule that binds it selectively, in a very fine way from the chemical point of view, with the cannabinoid receptors. Therefore, only those cells in our body that have those receptors are going to be sensitive to cannabinoids. And the cells that do not have these antenna, these receptors, will not recognize THC, therefore it will not generate effects on these cells ».

After explaining that there are two molecular variants of the cannabinoid receptors in our organism: Type 1, which are present essentially in the nervous system and Type 2, which present mainly in the immune system ». This allows, for example, the anti-inflammatory capabilities of cannabis ».

After this didactic explanation about the molecular functioning of cannabis in our body, Dr. Guzmán posed two essential questions:

« Why do these receptor molecules exist in our organism for an active molecule that is produced by only one of the approximately 300 thousand species of complex plants that are on Earth today? And why do each and every species of vertebrates, fish, reptiles, amphibians, birds and mammals studied have these receptors for the active principles of cannabis, including some invertebrates such as crustaceans and some worms? «

The best-known example of these endocannabinoid molecules is the « Anandamida » (discovered in 1992), whose molecular composition is very similar to the chemical substances produced by cannabis. The doctor said that in this way, this plant « may generate the same effects that these endogenous molecules produce in our body. For example, anandamide is a molecule that increases appetite and decreases motor activity. THC imitates the action of anandamide generating the same effects ».

Before explaining the role of endocannabinoids such as anandamide in our organism, Dr. Guzmán related in a very detailed and academic way how cells communicate in our nervous system, so that the general public could follow the explanation about the functionality of the endocannabinoids produced by our organism.

« In the vast majority of synapses, the communication points of our brain, the main neuromodulator that will inhibit the release of neurotransmitters, is anandamide. It is a molecule that, therefore, in general form and neurophysiological terms, stops the synaptic transmission, therefore having a relaxing, inhibiting, sedative effect. And THC is not going to do anything more than mimic the action of anandamide in our brain. This is the basis of many neuropharmaceuticals we have today ».

To end his presentation, Dr. Guzmán explained that not all the cells in our body that possess cannabinoid receptors are equally sensitive to the action of anandamide, and therefore to THC ». There are certain areas of our brain that are very rich in the presence of these receptors, and these are the regions of our brain that can be modulated pharmacologically by THC ».

« We have evidence of real cannabis therapeutic actions, which are already indisputable ».  (Dr. Manuel Guzmán)

Regarding the processes regulated by the endocannabinoids, Dr. Guzmán noted that « THC – and anadamida – affect the cognitive and memory processes, therefore in its therapeutic uses it can be used to eliminate aversive memories, for example in posttraumatic stress.

That’s because THC mimics the action of anandamide in areas of our brain that are related to memory and cognitive processes, such as the cortex and the hippocampus. THC and anadamide also decrease motor activity, which is interesting for diseases that cause spasms or tremors ».

Among the other actions with therapeutic interest generated by anandamide, and therefore imitated by THC, Dr. Guzmán highlighted the increase in appetite, analgesic action, inhibition of nausea and vomiting and stress reduction.

« These molecules generate a very wide amalgam of therapeutic effects, which we could summarize in this phrase of Professor Mechoulam: » Cannabinoids exist in our body to allow us to relax, eat, sleep, forget, and to protect our body, in a very general way , of stimuli and traumas « .

After this detailed explanation of the neurobiological basis of the action of cannabis, Dr. Guzmán pointed out as a summary, that since cannabinoids act in very different areas of our nervous system and organism, the « therapeutic possibilities (of cannabis) are very wide « , also highlighting its tremendous capabilities as a palliative treatment in many pathologies, especially in the fields of neurology and oncology ». We therefore have a knowledge of real cannabis therapeutic actions that is indisputable« .

« Western medicine is already relatively well prepared to tackle acute processes. There are many drugs that have a very high level of efficacy for the treatment of acute symptoms: we have benzodiazepines, steroids and opioids, and we must consider that these well-used drugs have a correct, desired action in short-term processes. But used in the long term they can have very serious negative effects on the patient, in addition to gradually losing their effectiveness« , he said as a summary, on the therapeutic benefits of cannabis compared with drugs of opioid origin.

Along with this, Dr. Guzmán highlighted the advantages of using it as a substitute or combined therapy in patients who do not respond or do not tolerate standard medications well, and those patients who depend on polypharmacy to treat their symptoms.

« And that is precisely where cannabinoids have their greatest niche: they are a great therapeutic tool in longer term treatments, for chronic diseases, for the patient who has more than one pathology, for where there are devastating, very aggressive diseases. That ability to use cannabis in long-term treatments is what allows the quality of life of these patients to improve so greatly« , he said.

In the video below, you can see the full presentation of Dr. Guzmán: 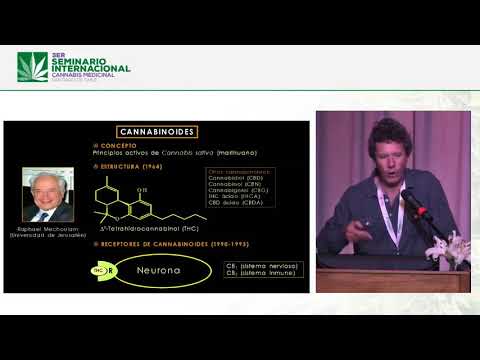