Released in July, a poll conducted by the sociological studies company OH Predictive indicates that 62% of the population of Arizona would support the legalisation of cannabis for recreational use. This is 9% higher than results shown by the same survey in December when just over half of the population said “Yes” to the plant.

The US state of Arizona now has a bill on the table which citizens will vote on in November. If it’s passed, the Smart and Safe Arizona Act will force the state to regulate the recreational marijuana industry by 5th April 2021. The law would allow those aged at least 21 to carry up to one ounce (28.3 grams) of marijuana and grow up to six marijuana plants at home.

The bill also covers taxes of 16% – the same tax rate as alcohol and tobacco – for recreational cannabis and derived products, and estimates that 145 licences will be granted for recreational marijuana dispensaries across the state. Finally, as of 21st July 2021, those convicted of possession of less than one ounce of marijuana or up to six plants before this law comes into force will be allowed to petition to have their criminal records cancelled.

However, the bill considers consumption in public spaces a minor offence, with a maximum fine of $300. Possession of more than one ounce of marijuana would be punishable by a $100 fine and four hours of drug counselling for a first offence; a second offence would result in a fine of the same amount and eight hours counselling. Reoffending for the third time would already entail a Class 1 misdemeanour, punishable by up to one year in jail and a $2,500 fine. Possession of between 1 and 2.5 ounces (28 and 70.87 grams) would also be considered a Class 1 misdemeanour, with fines of up to $300.

Currently, possession of up to one pound (453 grams) of marijuana in Arizona is punishable by between four months and two years in prison, and fines of between $1,000 and up to $150,000. The jail term is usually commuted to 24 hours of community service. In the case of selling up to two ounces of marijuana, the minimum sentence is one year in jail, interchangeable with 240 hours of community service. 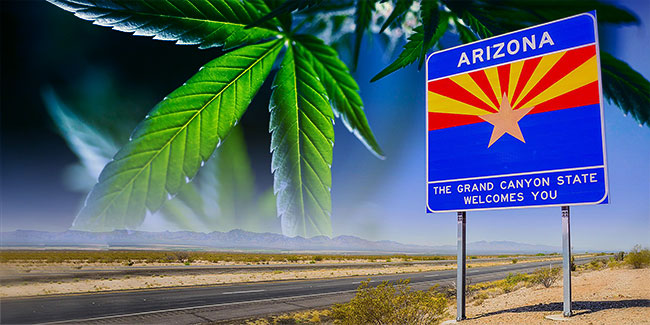 Arizona, currently governed by Republican Doug Ducey, approved the legalisation of cannabis for medical use in 1996; however, it couldn’t be implemented because federal laws made the provision for cannabis impossible. In 2010, a new proposal was approved whereby the use of medicinal cannabis became possible. Since then, all those with ailments for which the state has approved its use – cancer, glaucoma, HIV, AIDS, hepatitis C, multiple sclerosis, Crohn’s disease, Alzheimer’s, and chronic diseases that cause chronic pain, nausea, spasms or epilepsy among other problems – can have a card that allows them to buy medical cannabis from dispensaries. According to Phoenix New Times, 82 tons of medical cannabis were consumed in Arizona in 2019.

However, the bills that followed in 2002 and 2016 aimed at legalising the recreational use of cannabis failed – the first with 42.7% and the second with 48.7% of votes in favour. Four years later, polls predict that this new attempt to legalise recreational cannabis might be the one that finally becomes a reality.

The organisms of the soil are numerous, of different characteristics, and found in living, fertile soil. The highest concentration of these microorganisms occurs in the areas near the roots, and to allow an ...