In North Wales, Arfon Jones, a police spokesman, argues that this measure could be a great step forward to reduce prison violence and also to prevent deaths caused by overdoses. Indeed, he has recently called for jails to supply “free cannabis in controlled conditions and see if offences reduce”.

In an exclusive interview to The Guardian, Jones stated that prisons should trial a free cannabis distribution system for inmates with a history of substance abuse or drug addiction and see if the measure reduces current death rates caused by overdose and violence prisoners experience behind bars, and therefore help convicts overcome opioid dependence.

Jones, 66, has risen to the position of Crime Commissioner after several decades of service as a police officer, becoming Operational Inspector for the eastern division in North Wales before retiring back in 2008. He then went on to work for the Child Welfare Service in Wrexham, the largest urban area in North Wales with a population of over 68,000. 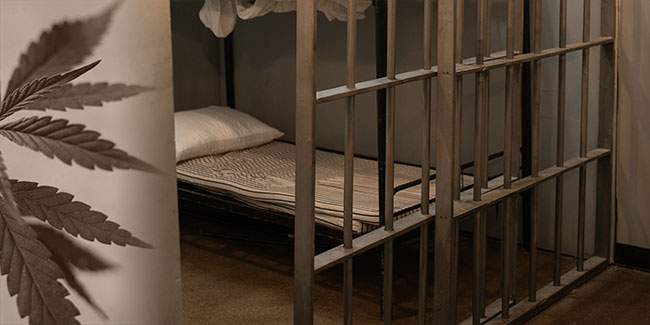 “The aim of the game is to make prisons safer,” stated the police commissioner. “If they’re serious about reducing violence in prisons, they should be addressing the causes and that’s psychoactive substances”. In addition, “there’s a whole range of issues that cannabis would be geared to reduce the risk of” concluded Jones

According to the Commissioner, many inmates receive treatment in prison with heroin substitutes such as methadone or buprenorphine, and receive pain-relieving medicines such as pregabalin or gabapentin, all of them highly addictive substances. Suicidal behaviors are among the side effects of gabapentinoids and the entry of illegal drugs into prisons is common and widespread.

“If they’re on opioids, why can’t they be prescribed cannabis?” Jones continues in the interview. “Opioids are much more dangerous than cannabis. It would be an improvement on the illegal spice smuggled in by corrupt prison officers too” he adds. Jones also referred to synthetic cannabis, popularly known in the UK as ‘spice’, a substance that attempts to mimic the effects of THC but with extremely dangerous side effects linked to fatal overdoses.

According to a research also published by The Guardian last December, since 2015 more that 300 prison officers and outside staff have been dismissed and some have been convicted for bringing prohibited items or substances into British jails, including synthetic cannabis. The number of drug finds and seizures in UK prisons rose to 21,575 in 2020, 18% more than the previous year.

Between 2008 and 2016, about ninety prisoners died in prison custody from drug-related causes, with methadone, heroin and benzodiazepine being the most common forms, according to a first study on the cause of death in national prisons carried out by the UK Office for National Statistics and published in 2019. The same report analyzes factors for suicides in prisons and the increase of this type of deaths to 462 during that same time period. According to data from the British Ministry of Justice, in 2020 alone 76 self-inflicted deaths were reported in UK prisons and, in 2019, 87 deaths by this same cause were registered.

The initiative to distribute cannabis to inmates in the UK is not unique to Arfon Jones. In 2018, Glasgow doctor and pharmacologist Stephanie Sharp had suggested to the prison administration to trial the distribution of free cannabis to inmates in an attempt to decrease the number of deaths caused by the use of synthetic cannabis. Actually, the proposal was made right after an investigation into the death of a prisoner allegedly related to the use of synthetic cannabis was opened in an Edinburgh prison that same year. A year earlier, in 2017, three police officers from Addiewell prison, located 40 kilometers from Edinburgh, had to be rushed to hospital after inhaling second-hand smoke from ‘spice’ or ‘zombie’ cannabis when entering the cell of an inmate who was using this synthetic drug.