“Anyone lost a huge amount of cannabis and a truck?” A surprising post by Indian police…

Losing a 20 euros note is not the same as losing a truck loaded with 590 kilos of cannabis. In the same way, reporting that you have found a mobile phone or a lost wallet containing some ID documents cannot be as shocking as having found a truck full of cannabis! We tell you about this surreal story taking place in India a few weeks ago and worthy of a Bollywood musical. 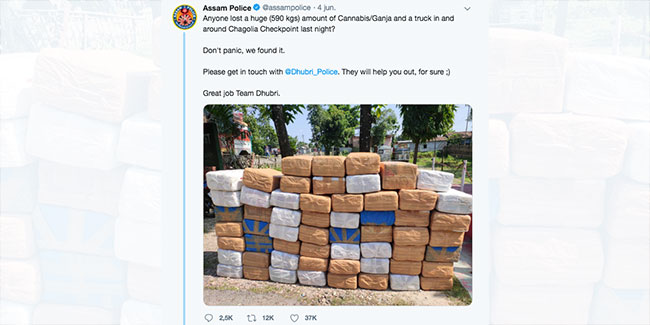 We do not know what crossed this agent’s mind, member of Assam regional police, a state located in northwestern India, when he encountered this situation. If his immediate reaction was surprising, people’s reaction on the social networks was even more, since the post went viral worldwide.

When this police agent ran into the abandoned truck, loaded with more than half a ton of cannabis at a border control, he understood that nobody would claim it and, without hesitation, he took out his cell phone and made a post on the official account of the regional police. He tweeted a photo with dozens of stacked cannabis cartons and a question: “Anyone lost a huge (590 kg) amount of cannabis/ganja and a truck in and around Chagolia Checkpoint last night? Don’t panic, we found it. Please get in touch with @Dhubri_Police. They will help you out, for sure”

One thing is for sure, the agent who published this tweet is a natural joker and Twitter community joined the fun with thousands of comments and replies. People from all over the world reacted to the policeman’s special sense of humor with some very funny tweets like “weed…what weed?” or “sir, my friends are joining me tonight, a small party. Can I take some, please?”

There were some who related this tweet with a famous series: “that reminds me of something, when is Narcos next season coming @NarcosNetflix?” and also those who used the opportunity to lecture a little: “great sense of humor without compromising sense of duty.” Although, without a doubt, the most valued was the style of the community manager of the account: “well done, @assampolice. And to the person who manages this account, great sense of humor!”

Police sense of humor goes around the world

Apparently, Assam’s police community managers are following the editorial line of Mumbai police, which would match with Carlos Fernandez Guerra’s, former social media strategist of the Spanish police until a few years ago who became popularly known throughout the country for his characteristic bold and provocative style and his mastery of bad jokes.

It seems that Mumbai police also crack jokes about criminals, posting recommendations and advices on how to act against crimes with an unsparing use of sarcasm. With this striking tweet, Assam Police, which has 17,800 followers, joins the school of humor of their colleagues in Mumbai, with almost 5 million followers. 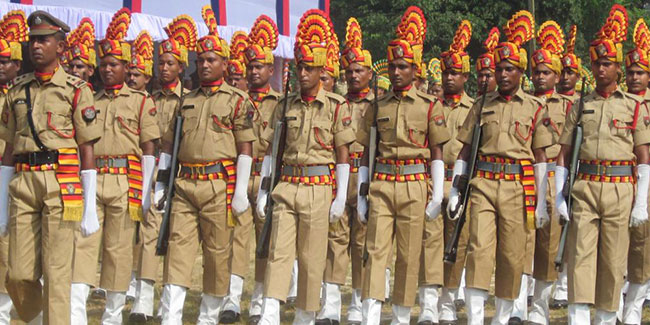 Situation of cannabis in India

Cannabis is totally illegal in the country of Taj Mahal, including both recreational and therapeutic uses. However, there are some voices in favor of its regulation. Dr. Shashi Tharoor, India’s Minister of State for Human Resource Development and member of the Thiruvananthapuram Parliament, in Kerala State, is also an author and columnist who wrote an article, with the collaboration of his nephew, entitled “High time India, the land of bhang, legalises marijuana “published in The Print. They mainly defended that “regulation allows cannabis buyers to know what they’re consuming and moderate their intake, in the same way that a drinker can distinguish and choose between a whiskey and a beer”

In this letter, Shashi Tharoor explains that he has never consumed any recreational drug but he is convinced that “legally regulating the production, supply and use of cannabis in India will reduce the potential harm of drug use, put a dent in corruption and crime and provide our country with an economic boost” To explain why, his nephew, Avinash Tharoor, who has worked on drug policy issues, has joined in the task. The article finishes by calling to action: “Now, as Canada, Uruguay and several US states end cannabis prohibition and begin to legally regulate the drug, India must take notice. It’s high time for India to embrace the health, business and broader societal benefits that cannabis regulation can bring”

What are the differences between Cannabis Indica and Sativa?

Many people approaching cannabis for the first time have doubts about its properties and uses. Are all strains the same? Are there some special varieties for medicinal use and others ...