Errejón and Más País: in favour of the regulation of marijuana

The formation of Iñigo Errejón’s Mas País (‘More Country’), supports the integral regulation of cannabis, of legalising its use for both recreational and medicinal purposes without the need to do so in stages.

An article published in a national newspaper in mid-October, written by Errejón himself and his Mas País colleague, Jorge Moruno, takes Canada and Colorado (USA) as an example. In both these places, adolescent consumption of marijuana has decreased following the comprehensive regulation of it. In Spain according to 2017 data, more than 35% of the population aged between15 and 65 claims to have tried it once in their lifetime. And more than 60% say that they find it easy to get hold of, which prompts them to think that its legalisation would not mean a drastic change in people’s consumption. In other words, it does not seem very likely that it would increase significantly.

The Mas País proposal would require a reform of the current narcotics law since both the sale and cultivation of marijuana are classified as illegal, and its consumption and possession is restricted to private spaces. 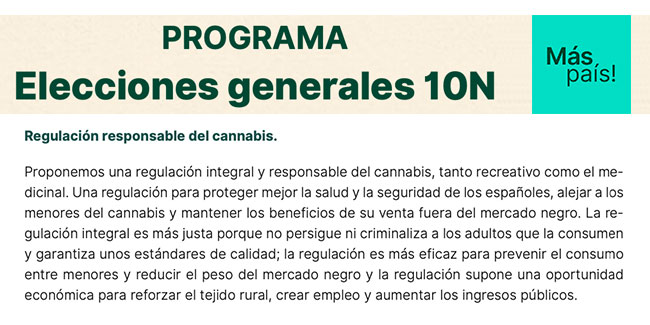 Mas País also points out the economic impact of the measure: jobs would be generated and, through direct and indirect taxes, also public revenues that would prevent the black market at the same time. The legalisation of cannabis would also involve the development of the sector at agricultural and industrial levels. All this, not to mention the more intangible aspects there would be: the destigmatisation of its use, and safety for consumers that it is a product that is quality-controlled and has health certification. This would allow its legal sale and controls from the relevant authorities.

It is strange that this proposal coincides precisely at the end of October with the trial of Fernanda de la Figuera, who is known as ‘Abuela Marihuana’ (‘Weed Granny’)  and who is one of the most veteran activists for the legalisation of cannabis in Spain. The case dates back to 2014 when the plants which supplied an association of women were seized from her garden. The prosecution requests a four-year sentence for Fernanda, a 76-year-old woman who is an institution in this movement. Indeed, various personalities of the movement in favour of the legalisation of cannabis, as well as culture and social activism, have shown their support for De la Figuera. 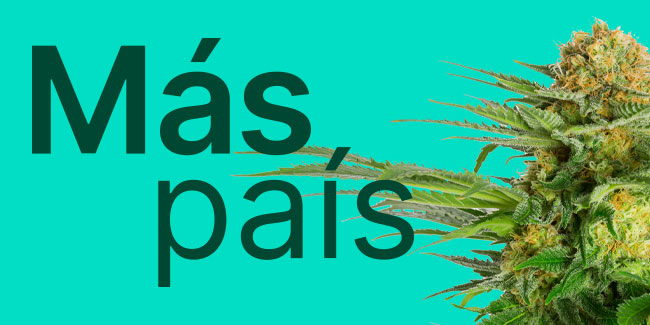 Recently, as Errejón and Moruno point out in their writing, the World Health Organization, based on scientific criteria, recommended that cannabis be taken off the list of drugs considered to be most dangerous. Without losing sight of the fact that although marijuana use is harmful to health, especially in minors, it is no more so than other legal drugs. Thus, its legalisation and complete regulation seems the logical and reasonable option. And for a political party to have the courage to put the debate on the table is, of course, very good news.

A revival of the iconic Bob Marley strain?

During the second half of the 20th century, Jamaica enjoyed widespread fame as a landmark destination for cannabis culture in the world. The island’s special features, with fertile soils and warm tropical climate, provided ...