According to Euromonitor International, an independent market research company, the legal cannabis market is forecast to grow in the next five years.

On November 20, in one of the latest webinars hosted by this consultancy company and entitled ‘The Evolving State of Global cannabis: Market, Consumers and the Future’, a study estimated that the total global legal cannabis market reaches over $30 billion today, just over a sixth of the $170,000 billion total turnover that cannabis sales represent, both legal and illegal. During the webinar, researchers from this company predicted that the proportion of the market for legal cannabis market will multiply the figure by three in the next years, exceeding $90 billion annually.

“As regulation progresses, the legal cannabis market is expected to account for 40% of global sales in 2025; companies will be able to tap into a large existing user base as well as nurture the curiosity of new adult consumers”, explains Shane MacGuill, senior director of research on nicotine and cannabis for Euromonitor International. 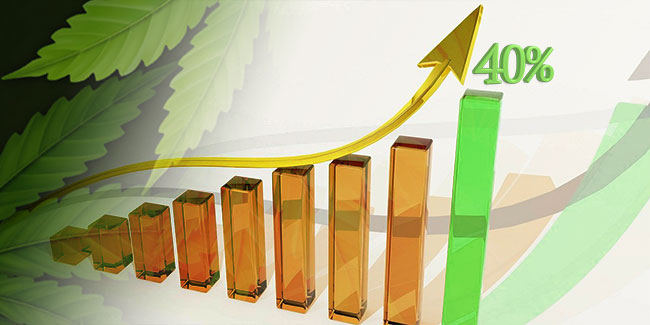 New regulations in this field would make new adult consumers to reduce the use of alcohol and tobacco and increase that of recreational cannabis, thanks to the new formats, according to the Euromonitor market study. Although flowers would remain the dominant legal cannabis format and bestseller, the sales of this product category will decline from 35% to 27%, giving way to other cannabis-derived products such as topicals, tinctures and edibles. These fast-growing formats will represent the highest sales growth in the next five years.

For Euromonitor, the most promising markets for the cannabis industry in the coming years will be Germany, Canada, the United Kingdom, the United States and Australia. In the case of Canada, this claim is not surprising since the North American country has been one of the main markets for this plant for years. Neither for the United States, considering the favorable results of last November referendums. In Germany, three main companies started a program for the cultivation of medicinal cannabis but it has been postponed until 2021 due to the COVID-19 epidemic. The study also forecasts an increase in the cannabis market turnover that will reach 5,8 billion euros by 2025. Also, it highlights the fact that recreational use of cannabis is expected to be legalized in Germany that same year, a legislative reform that will greatly depend on the results of next parliamentary elections this year.

Euromonitor also foresees that recreational cannabis will be legalized in the United Kingdom and that the use of medicinal cannabis will overall increase, although the CBD market is still very limited despite its legalization back in 2018. While in Australia, government is considering to authorize the over-the-counter sale of CBD products, a market that Euromonitor expects to experience a dramatic growth from AUD 55 million in 2020 to over AUD 2.3 billion by 2025.

Canadian Patients are now allowed to grow cannabis at home

A new regulation in Canada has made it possible for Canadian patients to grow cannabis at home. They can do so – always a “limited amount” –  since last August the 24th. The “Access to Cannabis for ...