Cannabis for vaccines: Activist group give away cannabis for COVID-19 vaccine in the US

A cannabis activist group for the legalization of marijuana announced that they plan to distribute free bags of cannabis to people who receive the vaccine against COVID-19 in the District of Columbia in the United States.

The campaign, called ‘Joints for Jabs’ was organized by DC marijuana Justice (DCMJ), the advocacy group that had also achieved the approval of Initiative 71, a marijuana legalization measure in the District of Columbia that was approved by popular vote back in 2014. The free cannabis demonstration they are now organizing aims to highlight the need for further cannabis law reform, at both the local and national levels, while also advocating for an equitable distribution of the vaccine. As explained by the group in a press release published on the organization website, the distribution of cannabis will begin when the vaccination plan reaches the general public, which they estimate will be by this coming spring. As they also posted on their Twitter account, they will also provide free joints to those who have already been vaccinated, such as people aged over 65, and stop by the vaccination centers with their vaccination cards.

According to this organization, cannabis, organically grown without pesticides or chemical fertilizers by local cultivators, will be distributed outside the vaccination sites so people can safely share a cannabis joint without contributing to the potential spread of the coronavirus by rewarding people who get vaccinated. The amount of cannabis they will lawfully distribute will never exceed the limit established by law, which in DC is one ounce (28 grams) per person, and exclusively to people over 21. 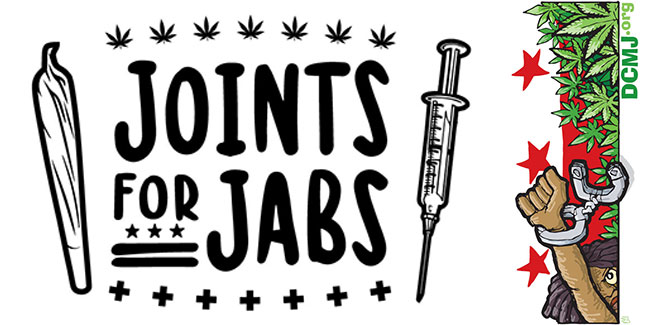 “We are looking for ways to safely celebrate the end of the pandemic and we know that nothing brings people together like cannabis,” Nikolas Schiller, co-founder of DC Marijuana Justice. “DCMJ believes that cannabis should be used safely and responsibly, and the pandemic has made this incredibly difficult for many adults to share their homegrown cannabis. When a sufficient number of adults are inoculated with the coronavirus vaccine, it will be time to celebrate, not just the end of the pandemic, but the beginning of the end of cannabis prohibition in the United States,” added Schiller.

Although cannabis dispensaries in the United States have been deemed “essential service” during the stay-at-home order in response to the coronavirus pandemic, this activist group still points out that many users have not been able to access this plant due to the pandemic.

The distribution of free marijuana also aims to remind the new US president, Joe Biden, of the promises made by the Democratic Party regarding the legalization of cannabis and, specifically, they point to the MORE Act, which the House of Representatives approved in 2020 and that now, with the Democratic majority in the Senate, could finish being approved in the coming months. This bill will federally legalize marijuana and will remove cannabis from the Controlled Substances Act.

“While no legislation is perfect, the MORE Act addresses many demands that DC Marijuana Justice has been making for years,” Adam Eidinger, another co-founder of DCMJ, said.

The ‘free marijuana’ initiative is nothing new to DCMJ. Back in January 2017, after the coming to power of Donald Trump, the same group organized a massive distribution of cannabis under the slogan “# Trump420” at the President’s inauguration. They passed out more than 10,000 joints that day in a demonstration that counted with the participation of thousands of activists and supporters of this advocacy group. The goal: the end the prohibition of marijuana at the federal level. But Trump seemed to ignore them.

Activist groups in other countries have also launched similar campaigns for massive distribution of marijuana as a form of protest to demand the final decriminalization and full legalization. In Spain, on February 2020, members of activist group ConFac, or Confederación de Federaciones de Asociacions de Cannabis, gathered in front of the Spanish parliament, the Congreso de los Diputados, to distribute marijuana buds among the representatives from all political tendencies to demand new cannabis regulation in this country.

We are raffling a ticket for Bilbao BBK Live

We would like to celebrate the International Working Day with you, because life is not just about working... At Kannabia Seed Company we would like to reclaim our right to have free time, leisure, having ...