Legal status of cannabis in Argentina

Legality of medical cannabis in Argentina

In Argentina, the medical use of cannabis has been legal since March 2017 when Law #27350 was approved allowing the use of cannabis derivatives to patients who have a regular medical prescription.

The new legislation was entitled ” Medical and Scientific Investigation into the therapeutic use of Cannabis and its derivitives”.

The law stipulates the creation of a “National Program for the study and research of the medicinal use of the cannabis plant” whose brief is to “verify the benefits and adverse effects of the use of the Cannabis plant and its derivatives as a therapeutic and palliative option for diseases whose diagnosis conforms to internationally accepted standards, and are subject to attention of the International Classification of Diseases of the World Health Organization (WHO). 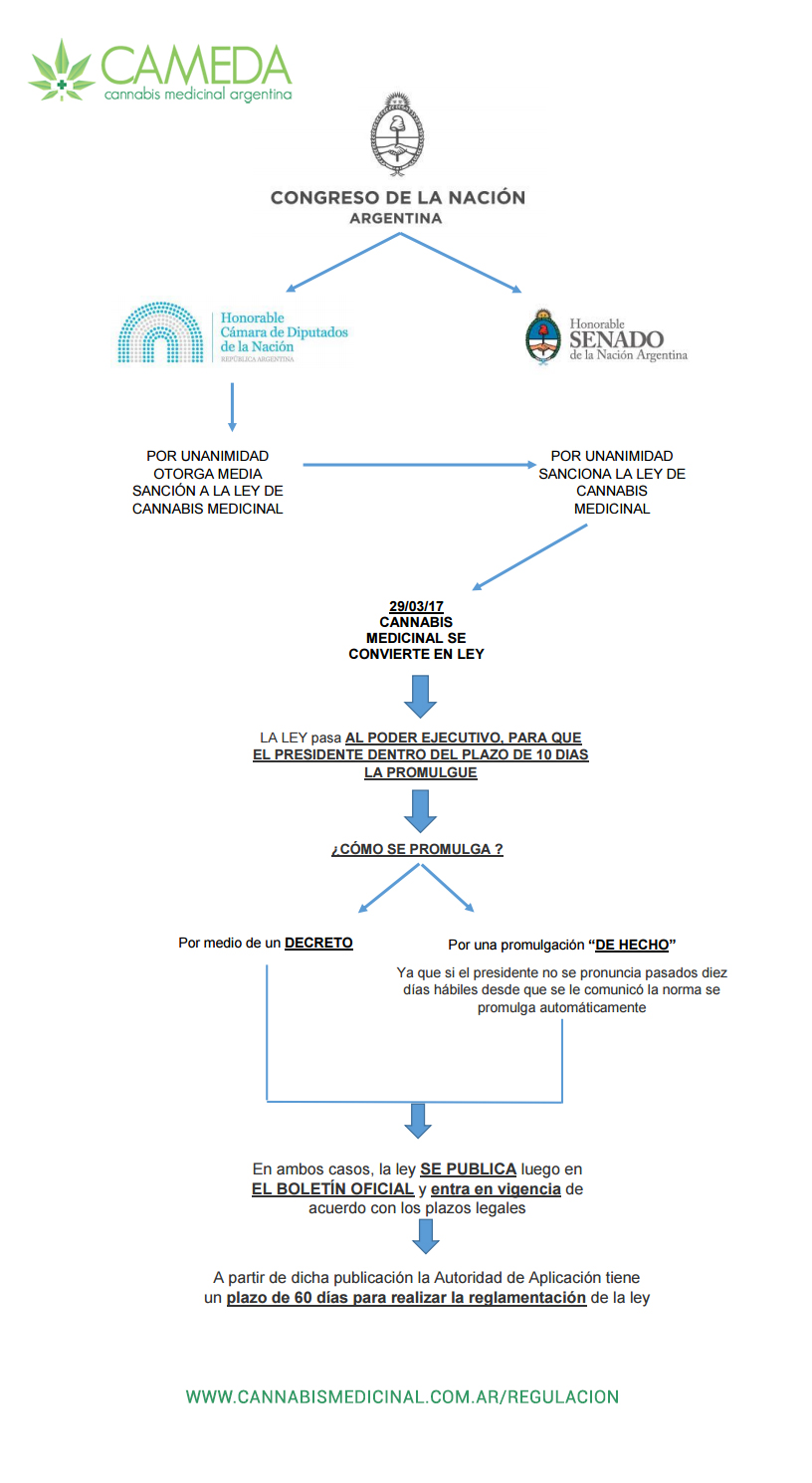 The Program must also determine the pathologies for which the medical prescription of cannabis derivatives will be allowed.

The National Administration of Drugs, Foods and Medical Technology (ANMAT) is the body responsible for the importation of cannabis oil (Charlotte’s cannabis) and other ingredients included in the program that fulfil the requirements. Anybody not enrolled in the program with a normal prescription will be required to pay the costs of the treatment.

The law authorizes the National Council for Scientific and Technical Research (Conicet) and the National Institute of Agricultural Technology (Inta) for the cultivation of Cannabis for the purpose of medical or scientific research to be used in the preparation of oils and other derivatives.

The law does not allow the self-cultivation of cannabis for medicinal use, an activity that remains illegal and that threatens the sick and cultivating mothers with between 4 and 15 years in jail in order to alleviate the suffering of themselves and their children.

Recreational Use of Cannabis in Argentina

According to a recent national study on the consumption of psychoactive substances, marijuana is the most commonly consumed illegal drug in Argentina, and has seen a significant increase in its use in the last 7 years. 7.8% of the people surveyed reported having used cannabis in the last year.

Despite this, the cultivation, sale and possession of cannabis for recreational use are illegal and regulated by Law 23,737 of 1989, which provides for prison sentences of between 1 month and 2 years for personal consumption (with the possibility of replacing the sentence with prevention courses or treatments) and between 4 and 15 years in prison for trafficking offenses (art. 14). The same penalty applies to home cultivation-

Even so, there is some evidence of a somewhat softer approach by the Argentine justice to consumption and self-cultivation as long as it can be demonstrated that it is solely for personal use.

From 2009 comes the precedent known as “Arriola”, the declaration by the Supreme Court of Justice of the Nation, of the unconstitutionality of the Drug Law article that regulates the consumption of drugs in the private sphere.

Following this jurisprudential fact, the debate on the decriminalization of the possession of drugs in small quantities was opened, a debate that is still open and of which there are still no definitive measures.

Change the Constitution or pass a law regulating the recreational use of cannabis: these are the two options that are back on the table in Colombia. In 2015,

Cannabis cosmetics are trending all over the world. So great is the hype and they are affordable and accessible in equal measure. Now it’s even possible to find cannabis-based facials in your local ...