Badajoz will become the hemp capital of Spain after the inauguration of the Hemp Technological Pole last October 13, a research complex which aims to become the reference center in the study of the industrial uses of this plant.

“Given the current exceptional situation due to the global health crisis, it is very likely that the economic recession will worsen in the coming years and this will require to come up with concrete responses and decisive actions. Industrial hemp could provide income and generate opportunities to revitalize rural areas in this region and achieve a sustainable development from an environmental, economic and agronomic point of view thanks to the characteristics and versatility of this material” as explained on the website of this new technology center.

This new Hemp Technological Pole has been created by the Centro Tecnológico Nacional Agroalimentario de Extremadura (or CTAEX) and Bhalutek Hemp, a specialized company based in Andalusia collaborating with the Department of Organic Chemistry of the University of Malaga which obtained a valid authorization from the Spanish Agency for Medicines and Health Products (AEMPS) for the cultivation of cannabis for medical and scientific purposes. Some of the collaborating partners already include a score of national and international companies, such as the Canadian Khiron Life Sciences, the Portuguese Kannabeira, the American Sovereign Fields – also granted with an authorization from the AEMPS for the cultivation of cannabis for research purposes – and educational institutions such as the University of Extremadura or the Clinical Research Center in Badajoz.

“The Pole will help build a framework for new cooperative and responsible philosophy; let’s hope for a positive evolution that will protect producers from marginalization and working for minimum wages”, declared Iker Val, director of Bhalutek Hemp, during the inauguration of the newly built center in the same existing facilities of the Centro Tecnológico Nacional Agroalimentario. At the event, the president of the CTAEX, Juan Jose Manzanero, took the opportunity to underline the need to make changes in the regulation to allow for the full development of this new sector and offer all legal guarantees, following the example of other neighboring countries, such as Italy.

“Hemp is an ancient plant that has been cultivated for about 10,000 years and recent studies continuously demonstrate the multiple benefits of this plant for the agriculture, the environment and the market”, explains Rosa de la Torre, head of the Science and Food Safety Division of the ​​CTAEX , in a video presentation of the new Hemp Technological Pole. 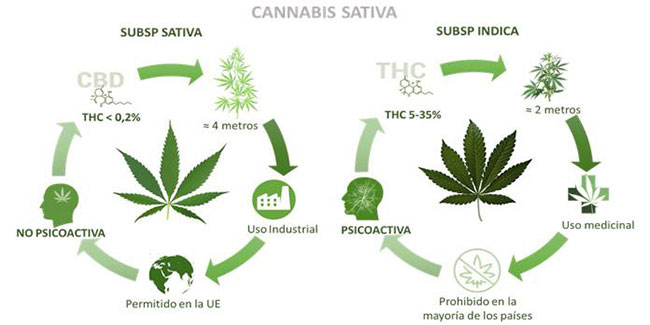 Extremadura has traditionally been a large producer of tobacco but since this crop is in decline, hemp farming could largely take its place. According to De la Torre in an interview for the national newspaper Público, “in Extremadura there are some 13,000 hectares used for tobacco cultivation and many of the landowners are willing to replace this crop because tobacco production is losing quota and hemp represents a more profitable alternative”. According to the latest data from the Spanish Ministry of Agriculture, Fisheries and Food, by 2019 in the region of Extremadura there were only 27 hectares dedicated to industrial hemp, producing 10 tons of the total 287 produced nationally in 167 hectares. That same year, the AEMPS authorized the cultivation of 180 square meters of cannabis in greenhouses, as reported in December 2019 by the newspaper Hoy.

On the Hemp Technology Pole website, visitors can learn about the wide array of hemp-based products that can be made out of this plant such as oil, milk or seed flour, all with great nutritional value thanks to its high content in protein, essential fatty acids and vitamin E. “Hemp seeds are considered as a superfood“, outlines the research center site. Also, the stems of this plant can produce textile and rope making fibers, new materials that could become an alternative to concrete. Leaves can make teas or compost, and hemp flowers and roots are the base for some medical, cosmetic and food products produced that can also be used as cleaning agents for toxins in the soil and water.

France to begin a pilot medical cannabis programme in September

From September, France will begin a pilot medical cannabis programme that will bring cannabis products to two hospitals for two years. The programme was approved in October 2019 as an amendment to the ...