Last September 30th, the Plenary of the Parliament of the Canary Islands gave its unanimous support on the adoption of a new regulation to facilitate legal access to medicinal cannabis, according to the newspaper La Provincia based in Las Palmas. During the plenary session, the legislative assembly of the Archipelago approved a proposal for a non-binding recommendation for the controlled production of cannabis for therapeutic use. With this decision, the Canarian Government intends to urge the central Government in office to take immediate action on this subject.

The petition on “regulation of cannabis and cannabinoids for medicinal use” was presented for debate before the regional parliament on July 29th and was jointly promoted by the Socialist parliamentary group, the left-wing Sí Podemos Canarias party, the nationalist Nueva Canarias party and the Socialist Group from the island of La Gomera.

In addition to developing regulatory measures that will facilitate access for individuals to cannabis-based treatments, this non-binding proposal calls for better legislative tools to be able to create “a system for evaluating the true impact of these alternative therapies on public health, especially on the quality of life of those patients who follow this type of treatments”. “The lack of regulation on medical cannabis not only poses a risk to the safety and ways in which patients have to get their remedies but also gives rise to several areas of concern about the quality of the cannabis-derived compounds they have access to. At the current time, there is no control over its origin or its purity, there are no recommendations on the form and frequency of administration nor the personalization of the dosing for each patient and disease, since there is no medical supervision on the administration, effects or effectiveness of these treatments”, explains the petition text.

The text approved by the Canary Islands Parliament also acknowledges the resulting legal uncertainty that medical cannabis consumers face given the current lack of legal framework. In Spain, law does not state the difference between recreational and medicinal cannabis. Therefore, patients who may use this therapeutic plant or any of its derivatives risk being sanctioned by the authorities. This is what happened to Fernanda de la Figuera, a veteran cannabis activist, who in 2019, after years of struggle for the legalization of cannabis, was sentenced to nine months in jail for a criminal offence for drug trafficking of “substances that do not cause serious hazard to health”. De la Figuera, who initially faced a four-year prison sentence requested by the public Prosecutor’s Office, was punished for distributing medical cannabis through an association of patients with different medical conditions. 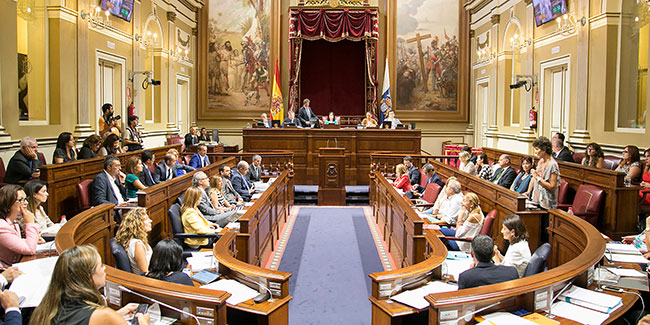 “In 2014, UN had already explicitly recognized the legality of the medicinal or therapeutic use of cannabis” recalls the text of the non-law proposal. “The International Narcotics Control Board (INCB), the highest form of legal world authority in the field, states in its report ‘Control measures applicable to programs for the use of cannabis for medical purposes‘, pursuant to the1961 Single Convention on Narcotic Drugs, allows States to use cannabis for medical purposes”. The text approved by the Canarian Parliament continues to explain that many countries have already begun to regulate cannabis for medicinal use and develop programs to facilitate access to medical supervision. The petition also points to the example of France, where a medical cannabis pilot program started last September is already benefiting over 3,000 patients.

Additionally, the petition notes the strong support given by Spaniards to a full regulation of medical cannabis, for which, according to a 2018 survey ran by the national Center for Social Research (CIS for its acronym in Spanish), 84% of the population voted in favor. “The lack of regulation in our country contrasts with the support of Spanish society to a total legalization of medicinal cannabis’. This social support is been reflected in many other regional parliaments in the country which have started initiatives in this direction in recent years.