Czech Republic becomes one of the leading countries in the sale of CBD products in Europe, launching a new and innovative system to buy them: vending machines. A total of fifty of these machines have been installed by the company CBDmat in some of the largest cities in the Eastern European country, such as Prague, Ostrava, Olomouc and Pasohlavky in South Moravia, so that consumers can easily and conveniently purchase some basic products of the new “green industry”, such as CBD oils and tinctures, cosmetics, drops, hemp disinfectants, and some edibles in addition to cannabis buds, also known as flowers. These machines are already being used successfully in other neighboring countries such as Poland and Austria, where such automat machines have now become common and are enjoying great acceptance in the public. 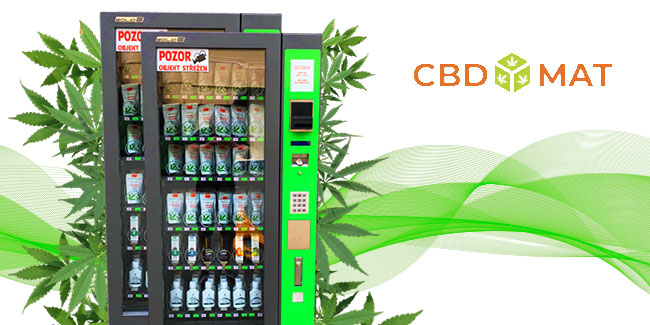 In a second phase, the company has declared that it is expected to expand its line offer and thus be able to provide the public with a greater variety of CBD products exclusively for therapeutic and cosmetic use. All products available contain low levels of THC, none exceeding the 0.3% legal maximum. According to CBDmat, they are solely focused in the market of low-THC cannabis and only want to vend CBD products with sedative, anti-inflammatory, antioxidant or analgesic properties since their aim is to provide consumers an easy way to access to articles that provide medical benefits for both their health and well-being. The company is only interested on stocking cannabis derived articles without the THC psychoactive side effects. In fact, it is noted that all available products are not intended for smoking but to use it for vaporization or as an ointment. Also, in these automats hemp flowers are presented in opaque bags containing three grams of the plant flowers and sold for an approximate price of thirty euros (750 CZK in local currency).

Medical marijuana has been legal since 2013 in this country. Since then, many cannabis-based therapies can be prescribed by a specialist doctor for specific diseases or health conditions. Likewise, in 2015, cannabis underneath the legal 0.3% THC limit was decriminalized. Nevertheless, the selling of these derived products in these vending machines face legal restrictions and can only be purchased by people over 18 years of age, discreetly packed in opaque containers and labeled as “collectors’ items”. In this way, the company tries to circumvent national CBD sales regulations already in place and avoid coming into conflict with the law while performing this commercial activity. According to Czech criminal code, the consumption and possession of small amounts of marijuana for personal use is no longer prosecuted. Despite the fact that cannabis remains illegal, it was back in 2010 when a law provision set the amount for personal use at a maximum quantity of 15 grams and, in the case of cultivation, up to five plants.

Czech Republic is one of the countries in Europe, along with France, with the highest number of cannabis users. It seems it is no coincidence that the company chose this country to start CBDmat vending machines operations.

In March 2015, the relevant authorities of San Marino commenced the in-depth studies about the theurapetic use of cannabis, and were followed up in April and September with a series of meetings between doctors ...