Spannabis 2020 finally cancelled due to coronavirus, and hopes to celebrate the XVIII edition of the fair in autumn

Coronavirus has taken its toll on the cannabis world. What was to be the 18th edition of SPANNABIS, the famous Barcelona Hemp and Cannabis Fair, has been cancelled. The celebration has been officially postponed until autumn 2020, with the date yet to be decided.

This has been reflected in the bulletin about this highly-celebrated event, published recently on the web and social networks by Feria del Cáñamo S.L, the organiser of Spannabis, considered to be “the largest cannabis fair in the world”.

As with other massive recent events such as the Mobile World Congress in terms of motives for the cancellation, the way to do it and the timing, it was also confirmed over the last few days as the opening date of Spannabis approached, that the trickle of companies in the cannabis sector were going to cancel their participation in the fair and withdraw from it as a preventive measure; this is due to pure precaution and to protect their workers and clients’ health. Meanwhile, Spannabis was intending for the fair to take place by all means possible – unsuccessfully.

Spannabis’ good intentions and their recent communications that they were going to take extreme measures (health, prevention, information, health care, hygiene measures, etc), hasn’t prevented large companies such as Dinafem, BitCanna, Royal Queen Seeds and this very company, Kannabia, from continuing to show legitimate doubts about the suitability of participating in the fair; more specifically, they have shown fundamental reservations about the safety of being physically present at this edition of the fair, with a stand and recruited personnel. The worst – tragedy such as a report announcing a death – has been feared over several weeks but especially this one.

Finally, an express order from the Government of Catalonia, which has been taking measures to prevent and contain the coronavirus outbreak since yesterday, strictly prohibits events with more than 1,000 people from being held throughout the Autonomous Community; furthermore, events of fewer than 1000 are required to reduce their number of attendees by one-third. Such a decree obviously meant the immediate cancellation of Spannabis as well as other events of a similar nature.

The Spannabis organisation, apparently forced in extremis and now by a legal decree to cancel and postpone the fair until the autumn, has received a barrage of comments (both positive and negative) for its decision-making; the majority of the exhibitors and professionals, as well as large sections of the public that were going to attend and the health authorities, of course, have praised the measure. „There’ll be another occasion”, „health comes first“, „they’ve done the right thing“, „better late than never“ … there are many opinions about it.

However, it must be acknowledged that negative criticism has abounded. Some are disappointed by the lack of speed in taking serious measures or the „excessive optimism“ that Spannabis has seemed to show at times.

Several sources such as Soft Secrets point out that during the weeks leading up to the event, organisers received numerous petitions from exhibitors to postpone it; nevertheless, the Spannabis Fair (doubtless due to financial pressure because cancellation would entail huge losses) decided to go ahead at any cost because „the health authorities and the Government say there’s is no reason to cancel events, and recommend continuing with normal life.“ 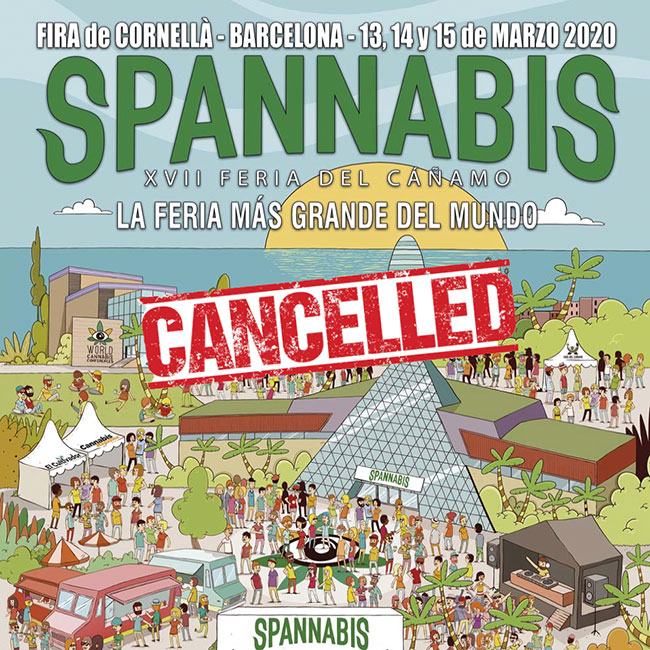 Although this could be true (and, in light of more and more casualties and people increasingly infected, numerous announcements encouraging the general population not to fall into hysteria or collective paranoia have been made from these same health authorities and the Government over recent days), many professionals, exhibitors and members of the public think that the fair should have announced its cancellation earlier. This would have minimised economic damage. The apparent lack of foresight has been due, above all, to the weight of immediate and spurious economic interests (containing losses, pressuring exhibitors by reminding them that they had signed a contract with them and so on), putting business above the health and safety of attendees.

Lights and shadows of a phenomenon that affects us all as the coronavirus outbreak seems to continue to spread globally. In recent hours, in fact, some countries such as the United States have taken drastic measures, suspending flights from Europe for a month, and yesterday, many Latin American countries announced that they were going to quarantine passengers on all flights arriving from Spain.