Cannabis industry creates more than 320,000 jobs only in the US

At this current time, there are already more workers in the United States legal cannabis industry than electrical engineers, emergency medical technicians (EMTs) or paramedics, and more than twice as dentists. According to the latest Cannabis Jobs Report released by cannabis resource and marketplace Leafly and the business economic consulting firm Whitney Economics, the number of full-time jobs has doubled and is expected to continue growing.

According to this report, released on February 16th 2021, the current number of full-time workers in legal cannabis sector in the United States stands at 321,000 workers. That represents 77,300 more jobs than those recorded in 2020, and around three times more than those in 2017, first year in which Leafly began to record and report cannabis-related jobs creation since official statistics by US government agencies do not collect this type of data because these state-legal work positions are still considered illegal at a federal level, while cannabis is still included in the Schedule I of the Controlled Substances Act (CSA), despite the fact that the UN has already recognized the medicinal value of this plant.

This increase in jobs in the US has been accompanied by a quantitive 71% rise in medical cannabis sales in 2020, compared to the previous year.

“When the COVID-19 pandemic hit the United States in March, many in the cannabis industry were concerned about a potential industry-wide shutdown” Leafly reported.

However, as they explained during the presentation of the report “instead, governors in most states declared cannabis as an essential product. Dispensaries and retail stores responded by offering online ordering, curbside pickup, and delivery as COVID-safe options for their customers”.

By state, California continues to lead the nation’s cannabis industry with 57,970 full-time jobs in sector, 23.7% more than the previous year. Thousands of people have traveled to the Golden State in recent years looking for the new American dream in what is now known as the ‘new gold green rush’. The new mining: trimming, a technique used to finish marijuana buds by scissors before they are taken to be sold in the dispensaries. “It’s a lot of money. A day you can perfectly finish two bags of 450 grams each, that is $400. You can multiply this for two or three months to get an idea”, explained to Kannabia a girl who had traveled from Spain to the United States several years ago in a 2017 blog interview.

Colorado, with 35,539 workers, is the second state with largest number of jobs in the cannabis sector. Also, it is the state with both the highest per-capita cannabis sales and tax-revenue per capita, with 2.28 billion dollars in sales and 350 million in taxes collected by the state, in 2020 alone. 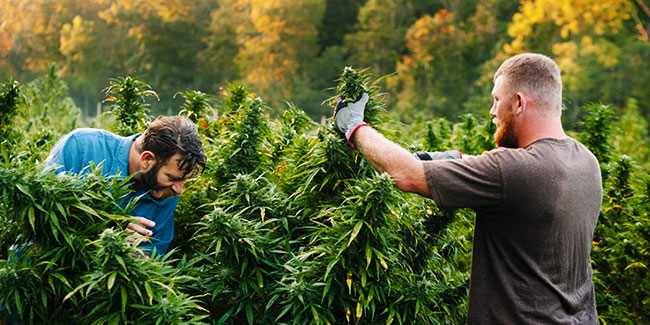 Florida, with 31,444, is the third in number of workers and the second in growth, with 14.89% increase, since 2020. In 2020 alone, 170,000 medical marijuana patents were registered in The Sunshine State. As they point out on Leafly’s report, if this state ends up legalizing recreational cannabis, the number of jobs related to this industry would double. After Florida, the next state with the largest number of workers is Arizona, where the first adult cannabis store opened recently in January 2020 after November was one of the four US states that approved recreational cannabis in the referendum held on Election Day.

The State of Washington, which legalized recreational cannabis in 2016, would be the fifth state, with 19,873 workers.

In Michigan, the sixth state in number of cannabis-related jobs in 2020, with a total of 18,000 positions, and the third with the highest growth rate, 9.21%. The report indicates that, by now, there are already more people working in the legal cannabis industry than police officers. This state decided to legalize recreational cannabis in December 2019. “In a state known for its automobile industry, the number of cannabis workers is almost equal to that of mechanics” the report finally adds.

Sale and consumption allowed but production and distribution prohibited: this has been the Dutch cannabis system for 40 years. According to various municipalities, this legislative contradiction has led to problems ...