More cannabinoids in the test tubes

Since the beginning of time, Cannabis sativa plant has been used by different civilizations to alleviate and heal diseases. In traditional Greek, Egyptian, Chinese or Thai cultures there were male and female healers who already utilized this plant as a remedy. Throughout history, marijuana has been considered a magical and spiritual plant, but above all, it has been appreciated by its medicinal benefits. Nevertheless, in modern times, the use of cannabis declined due to the rapid rise of consumption of opium-derived drugs. In this article, we will mainly focus on the analysis of the chemical components that are present in the Cannabis Sativa L. plant. In recent years, several studies have been published in different countries where medical cannabis has been legalized and there are several research programs running in parallel. These studies and publications show that there is a significant decrease in the use of psychotropic drugs and analgesics among patients using cannabis for therapeutic purposes.

Medicinal cannabis preparations, unlike marijuana on the black market or homegrown weed, follow strict quality standards and requirements for active substance content, stability and control of the absence of pesticides, fungi or other diluents. These questions are the base for research and development of cannabis-based drugs. The term “cannabinoid” refers to a family of molecules that bind, at the cellular level, to receptor proteins found in the endocannabinoid system (ECS), a complex cellular intercommunication system found in the human body. The identification of cannabis compounds even predates the discovery of the ECS, and it was instrumental in the discovery and study of this physiological network. Amon other functions, the ECS inhibit the release of many neurotransmitters.

The cannabis plant contains some valuable chemicals known as phytocannabinoids, which are naturally occurring lipophilic (fat-soluble) terpene phenolic compounds, and each of them has its own pharmacological profile, biological effect, and consequent therapeutic potential. The recent discovery and study of cannabinoids, and only a few have been identified and studied so far, show that marijuana is an inexhaustible source of possibilities. Cannabinoids can interact as antagonist and agonist receptors, a fact that can lead to confusion. During cannabinoids analysis, we can observe how some of them present a synergistic reaction, enhancing a particular effect, while others decrease it. Terpenes and flavonoids are responsible for the aroma and flavor of marijuana plants, elements that also interact with cannabinoids.

It was in the 60s when Israeli professor Raphael Mechoulam, considered the father of contemporary cannabis medicine and research pioneer, managed to isolate and synthesize the active ingredients of this plant; first, the best-known cannabinoid, the psychoactive Δ9-tetrahydrocannabinol (Δ9-THC) and later the cannabidiol (CBD). The results of these investigations provided new data and evidence. For instance, it proved that THC has an incredible ability to interact with various cells in the body, hence this organic compound is also called “a molecular lock and key” since, once in your body, it connects to the CB1 and CB2 receptors of the ECS, which are cell membrane proteins found in the outer layer of our body cells, and act as chemical messengers. CB1 receptors are found mainly in the central nervous system and, to a lesser extent, in the heart, uterus, ovaries, spleen, and tonsils. In the case of CB2 receptors, they are located in the spleen, tonsils and thymus in the immune system.

Mechoulam and his research team studied the reason why there are specific receptors in the human body for this type of molecules. Later, during the 90s, they identified a cannabinoid that the human body produces naturally, named “anandamide” (AEA). This finding led to the discovery of a new molecule, 2-arachidonylglycerol “2 AG”. The term anandamide was coined from the Sanskrit word “ananda”, that means happiness, and this brain lipid is part of a complex intercellular communication system found in our body, the endocannabinoid system, which is closely related to the body’s self-regulatory systems, such as the regulation of temperature, the stabilization of pH or control of blood sugar levels. Other important processes are also attributed to this system, such as motor coordination, neuroprotection or pain or appetite control. The ECS, although it is still considered the great unknown, is responsible for maintaining balance in different primary biological functions of the human body. This biological phenomenon is called homeostasis. As Mechoulam declared in an interview:

“I believe that cannabinoids will lead to new forms of drugs, new medicines to treat widespread diseases, but we researchers still have a long way to go. We need more clinical trials in humans so we can advance even further”.

Cannabinoids are compounds that can be both endogenous and exogenous and that interact with the endocannabinoid system.

They have been classified into three types:

Phytocannabinoids: organic compounds belonging to the group of terpenophenols which are detected in plants, such as cannabis.

Endocannabinoids, also called endogenous cannabinoids: organic compounds generated in our body and interacts with both the central and peripheral nervous systems. There are five identified endocannabinoids to date: anandamide, arachidonoylglycerol, noladin, virodhamine and N-Arachidonyl dopamine (NADA).

Synthetic cannabinoids: compounds artificially produced in a laboratory for medicinal use.

Science has identified more than 100 phytocannabinoids in this plant, but they have not yet been fully identified. These cannabis compounds are extremely valuable as they have great health benefits and high medicinal properties for humans and animals as well. Cancer patients look to cannabis seeking mainly two benefits: alleviating the side effects of the therapies these patients are subjected to, or boosting antitumor responses. It is also being used to treat Alzheimer’s disease, epilepsy, Autism Spectrum Disorder (ASD), multiple sclerosis and some pediatric conditions.

Moreover, there are seven cannabinoids of higher importance since they can be found in larger quantities and there is scientific evidence to demonstrate the great potential of its biological and therapeutic effects: 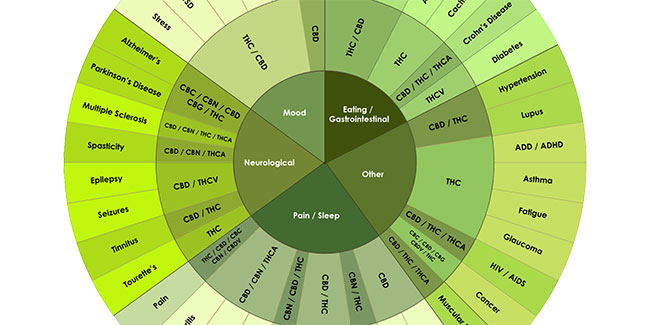 The discovery and study of some of these new molecules have transformed the cannabis science scenario, while many others remain largely unknown. The most rigorous scientific studies have focused on two of the most widely known and abundant phytocannabinoids, which are Δ9-tetrahydrocannabinol (Δ9-THC) and cannabidiol (CBD). However, some of the new less abundant compounds are also gaining prominence in new research.

These cannabinoids still have therapeutic effects on their own when isolated but their properties are enhanced with what is called the “entourage effect” that refers to the synergy produced when combining different cannabinoids. This combination boosts the health benefits attributed to these compounds, and can be further enhanced if terpenes are added; this interaction of cannabinoid receptors with the endocannabinoid system produce a larger therapeutic effect. The world of cannabinoids is very complex one especially since we are only now beginning to understand how they work despite the fact this plant has been used for millennia. Fortunately, this is changing and the medicinal potential and the wide therapeutic spectrum that can greatly benefit us are being deeply investigated, particularly CBD, which is no longer considered an intoxicating substance.

In Spain, some major studies are being carried out, such as that of the Department of Mining, Industrial and ICT Engineering of the Polytechnic University of Catalonia (UPC) in the city of Manresa, where 43 other cannabinoids have been characterized, 16 novel compounds among them that had not been identified so far. Other than THC, CBD or CBN, they have found the acidic form of these compounds: THCA, CBDA, and CBNA, among others. Characterizing novel compounds of cannabis opens the door to discovering new medical uses of its active ingredients and opens up great prospects for research in this field.

Ultimately, the growing popularity of CBD and other cannabinoids does not go hand in hand with the onward legalization of cannabis in the Western world. As we all know, for all ‘legal’ drugs (such as alcohol or tobacco) there is a strong publicity interest in exalting the supposed benefits that they may provide but supported by little scientific evidence base. Today, there is a growing consensus among the scientific community and health professionals that medicinal use of cannabis has been and will be a real alternative therapy in the field of palliative care. The therapeutic effectiveness of marijuana has been widely proven for years in the treatment of severe forms of childhood epilepsy. A recent meta-analysis conducted with 550 children showed that those treated with CBD had 20% fewer seizure frequency. In addition, there are three areas where the potential effectiveness of CBD has been investigated for its anticonvulsant effects: chronic pain, mental health, and neoplasms.

More than anything else, we are not talking about anything new. The value of cannabis in pain treatment has been claimed since ancient times but new scientific evidence from well-designed research studies demonstrates that CBD is effective in reducing pain in cases of fibromyalgia, kidney transplant, multiple sclerosis and spinal cord injury. Even in the field of mental health, where the use of CBD is now been indicated for the treatment of depressive and mood disorders, as well as in therapy-based approaches to treating substance abuse. These significant achievements made at the research level suggest that we are closer than ever to normalizing, democratizing and popularizing the use of medical cannabis.

Marijuana has been and is a great source of inspiration for singers and composers. In Kannabia, we’ve rescued these 10 love songs dedicated to marijuana.  Now you can include it in your ...