The Washington State Liquor and Cannabis Board (WSLCB), the government agency responsible for the regulation and control of these substances, has approved a measure to allow state-licensed cannabis retail stores to give away marijuana to people 21 years of age and older who receives the COVID-19 vaccine, according to NBC News. This decision comes three months after the DC Marijuana Justice (DCMJ) group launched a similar campaign, “Joints for Jabs”, last April in the District of Columbia, the nation’s capital, under which volunteers from this advocacy organization distributed more than 85,000 joints to people who attended different health centers to be fully or partially vaccinated.

The initiative, passed on June 7 and running until July 12, is the latest incentive to encourage residents to get vaccinated against the coronavirus disease, and will be conducted by local cannabis retail stores. To do this, licensed marijuana stores must buy exclusively from authorized producers and must keep records of any product given away to vaccinated individuals. According to a first state agency’s press release in this regard, the authorization came after receiving multiple requests from cannabis licensees to get permission to give away cannabis as a way to help promote the vaccination campaign.

In a later bulletin publication, the Liquor and Cannabis Board (LCB) further indicated that cannabis retail stores will be allowed to host COVID vaccination centers in their parking lots. “The LCB supports this vaccination incentive as another effort to help get the state overcome this situation. We continue our efforts to make it easier to participate”, explains the organization in the published bulletin.

The new program run by the Washington State government follows the guidelines set by the DC Marijuana Justice group and also takes its name from their campaign. This advocacy organization, closely involved in the cannabis legalization process in DC, announced already in March a mass cannabis distribution plan as soon as the vaccination campaign would begin. A month later, as the organization posted on its Twitter profile, around 85 DCMJ volunteers had distributed over 4,200 joints in 35 COVID vaccination centers. The DCMJ campaign, in addition to supporting vaccination against COVID, also aimed at reminding the country’s new president, Joe Biden, about the electoral promises made by his party in relation to a federal legalization of marijuana and, especially, the long-awaited final approval of the MORE Act, a bill introduced in the House of Representatives in 2019 and that decriminalizes and remove cannabis from the Controlled Substances Act.

But Washington is not the only US state where free weed is being used as an incentive to bring communities closer to vaccination centers through participation in campaigns promoted by a growing number of cannabis retail stores, businesses and non-profit organizations. According to Leafly, in Arizona, one of the leading dispensaries in the state also gives out pre-roll and edibles joints to each person who visits one of the store locations and provides a proof of vaccination. In California and Michigan, several cannabis dispensaries are giving out selected cannabis products for free or being sold for just a penny to anyone with a vaccination certificate. 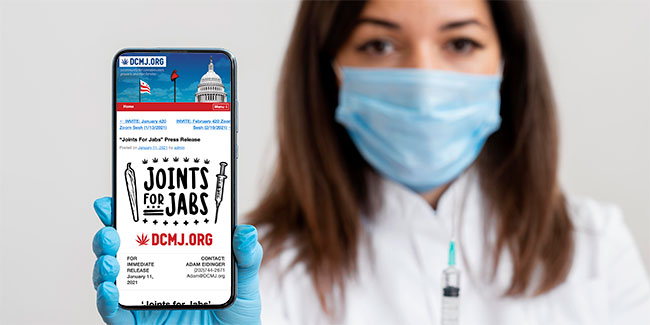 Another advocacy group in New York, “Act Up”, that fights for the rights of people living with AIDS, has already organized two “Joints for Jabs” events, distributing around 300 joints among the newly vaccinated. “We know that young people are hesitant to get the COVID vaccine, especially if their families are, so rather than relying on the fear of getting COVID, we want to encourage them to get vaccinated in a positive way,” Kellen Gold, an organization member, declared in a statement published on the Act Up website. This group also demands a city-based legislation by the New York City Council permitting a self-managed system for cultivation of marijuana in vacant lots to be able to provide free or cheap cannabis for medicinal use.