A recent survey shows that 55% of Europeans support the widespread legalisation of marijuana for adult use. In addition, most cannabis advocates in Europe are also in favour of home cultivation and regulated retail sales. This figure of 55% is strikingly similar to that with which the legalisation initiatives in Colorado and Washington were approved in 2012, which marked the beginning of the first legal cannabis markets in the USA.

This survey was conducted by Hanway Associates, an American research consulting firm specialised in marijuana. It shows that, after decades of opposition, the steady expansion of the medical cannabis market and the rapid growth of welfare-focused CBD products have helped change the European perception of cannabis.

This move away from resistance and towards acceptance is a good sign for business owners and investors who now look with excitement towards Europe, where almost 30% of the citizens would consider trying legal cannabis. This would in turn transform the continent into a market with over 120 million potential users.

The study, which was conducted on people over the age of 18 between 24th February and 14th March, found that 55% of Europeans support the legalisation of marijuana for adults; 25% oppose; and 20% are indifferent. Of those in favour, 81% support government-regulated retail trade; 62% support home growing; and 56% defend cannabis social clubs.

The survey reveals marked differences between different nations and their attitudes towards possible regulations for the introduction of cannabis into the legal market.

According to data from the survey by Hanway Associates, Italy and Portugal stand out as the countries most supportive of legalisation, with 60% and 59% of their citizens (respectively) in favour of government-regulated sales, despite the fact that important reforms still need to be approved.

In contrast, and despite its famous ‘coffee shops’, the Netherlands surprisingly has the most pessimistic views on this, with only 47% of the respondents in favour of regulated sales. This is the lowest figure among the eight countries surveyed. In addition, only 20% of the Dutch people would be comfortable having a cannabis shop in their neighbourhood.

One of the reasons for this lack of Dutch enthusiasm towards the support for legal cannabis sales could be found in the negative experiences they have had with their coffee shop model and the impact of ‘canna-tourism’ on their streets.

Spain offers an interesting counter example to the Netherlands, by showing a great support for legal cannabis, whilst also having a long history of access to cannabis through social clubs and home grows. This may be because cannabis clubs are concentrated in areas like Barcelona, where they are more discreet and less tourist-friendly than the Dutch coffee shops (mainly because they require references for membership). 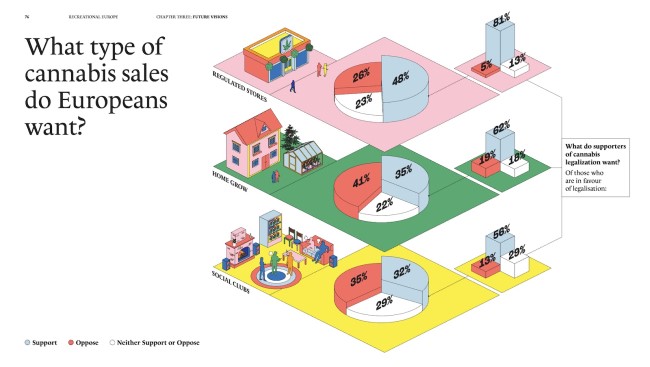 What type of cannabis sales do Europeans want?

While European countries certainly have much more in common with each other than with the North American markets, it’s important to remember that these nations have had significantly different political, historical, and cultural experiences, all of which are highly influential on the public sentiment and the need for change. For instance:

In general terms, people’s reservations about self-cultivation reflect a broad ‘not in my backyard’ feeling towards cannabis, with the public being concerned about the discomfort of being directly exposed to the cannabis use of others, particularly in the UK and France. This coincides with the support for other measures, such as restrictions on advertising or consumption in public spaces.

Germany in the spotlight

According to the report, this change in public opinion is seen by the industry as an opportunity for governments to initiate regulatory reforms that would not only permit the use of medical cannabis but also allow its recreational use. Such a decision would generate billions of euros in new revenue for the countries involved.

In actual fact, pilot projects in Switzerland, the Netherlands, and Denmark aimed at both medical and recreational cannabis are helping to improve the confidence of the general population. France authorised the cultivation of medical cannabis this year, after having started its pilot scheme in 2021. The scheme enables thousands of patients to obtain free cannabis products while the government evaluates the clinical data derived from the treatments. In Denmark, the parliament voted almost unanimously to extend the pilot trials, given their relative success in recent years. And as of 2022, Ireland has started its pilot scheme, whilst Luxembourg will be carrying out its first evaluation.

But it is Germany that is in the spotlight right now, with the coalition government that recently assumed the presidency of the nation promising to legalise marijuana. However, it is still unknown when this will happen.

According to another report by Prohibition Partners, it is likely that the first sales of fully legitimate recreational cannabis for adult use in Europe will occur in Switzerland by the end of 2022. This report also predicts that cannabis sales could reach €1.5 billion by 2026, although this forecast depends on how rapidly progress is made and on the full implementation of legalisation in Germany. 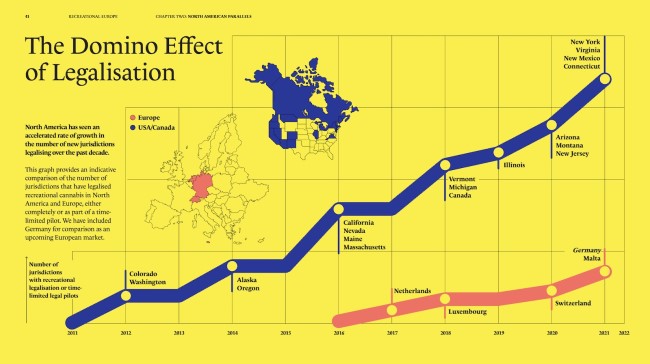 Data leads in one direction

According to new data released by Hanway Associates and Prohibition Partners, Europeans are increasingly more supportive of cannabis legalisation. The acceptance of the plant shouldn’t come as a surprise, since Europeans have been watching the economic gains in the USA, especially during the Coronavirus pandemic, when the use of marijuana skyrocketed.

Besides, many European countries have already legalised marijuana for specific medical purposes, while others have decriminalised its general use; and others like France are now exploring these two options through experimental programs.

Therefore, cannabis in Europe is perceived not only as an economic opportunity but also as an opportunity for policy makers to start talking about standardisation. This is important because it appears to be an inevitable fact that, with more than half of the Europeans in favour, there is now sufficient public support for the legalisation of our beloved plant.

Kannabia and Plantasur sign a collaboration agreement with the SAPP NGO

Thanks to the agreement, Kannabia and Plantasur companies have delivered a substantial donation to the Granada based NGO SAPP. Funding will be prioritized for the construction of a school in Masaka, Uganda, a ...

Can marijuana help me sleep better?

Many marijuana users choose to smoke in the evenings, when they can relax on the sofa after all the daily activities are finished. However, whilst many people believe that cannabis helps you ...