The Republic of Argentina joins, from this moment on, the long list of countries that have already provided a regulatory framework for the medical cannabis industry and is set to foster the further development of a new market for industrial hemp production. Matias Sebastian Kulfas, Mnister of Productive Development of the current Alberto Fernández leftist government, presented a few days ago the bill that will create the legal and administrative basis for the regulation of hemp industry in this country. For months, work has been done on the development of this project, using the existing legislation in countries such as Uruguay and Canada as references. According to the projections of this Ministry, it is estimated that the new industry could generate more than $500 million only in domestic market sales, another $50 millions annually in exports, and the creation of more than 10,000 jobs.

Cooperatives and SMEs are expected to have a key role in helping to promote the development of this industry. The bill also proposes the creation of a control and regulatory government agency, the Regulatory Agency for the Hemp and Medicinal Cannabis Industry (or ARICCAME) that will perform, among other functions, the regulation, administration and supervision of the entire cannabis and hemp production process, as well as the issuing and granting of the necessary authorizations to become a producer, manufacturer or retailer in this sector. The ARICCAME will be made up of the ministries of Productive Development, that of Health, Agriculture, Livestock and Fisheries, and that of Science and Technology and Security.

The project, under the title “Regulatory framework for the development of the medical cannabis and hemp industry”, was presented at the Economic and Social Council celebrated on June 2 at the Bicentennial Museum by the ministers of Productive Development, Matías Kulfas, Health’s, Carla Vizzotti, and Science, Technology and Innovation’s, Roberto Salvarezza, and Agriculture, Livestock and Fishing’s, Luis Basterra. Also, the Secretary of Strategic Affairs of the Nation, president in turn of the Economic and Social Council, Gustavo Beliz, attended the official presentation event. All the gathered authorities expressed their satisfaction with the collaborative work and the dialogue, that have contributed to bringing this plan to fruition and placing the Argentine Republic closer to the full legalization and normalization of cannabis. The proposed legislation will be sent to the Congress of the Nation to be submitted for debate and amendment in the next few days.

The objective of the law is to establish the regulatory framework for investment, both public and private, in the entire process of medical cannabis production and distribution. Currently, cannabis is only allowed for therapeutic and palliativeuse but this project will complement the existing law already in Argentina, while making the current scheme more flexible in terms of legalizing the production and commercialization of industrial hemp and by-products. 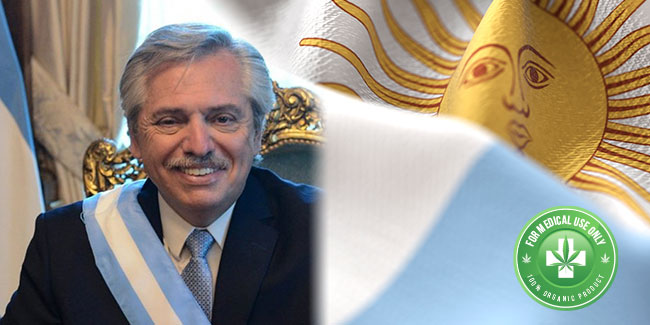 The cannabis industry is undoubtedly experiencing a moment of growth at a global and level, an exponential increase that necessarily represents a potential source of employment opportunities and growth, which will have a positive impact on the economy of the more than fifty countries that have already attained a more advanced stage in terms of development of legislative framework for both medical and industrial use of cannabis. At this time, Israel, Canada and the United States are leading this industry worldwide, with the increasingly prominent role in this sector of Colombia and Uruguay in Latin America.

The Argentine government is optimistic and regards this law as a great opportunity to turn the country into a regional leader in the cannabis sector, due to its predominance in the infrastructure, both in agricultural and industrial, and its productive, scientific and technological capacities.

Marijuana as a allied to fight Tourette syndrome’s symptons

Marijuana in the fight against the symptoms of Tourette Syndrome. Tourette syndrome is a neurological disorder that appears in childhood. Tourette´s symptoms include involuntary tics at a phonic and motor level. No cure has been ...

When a group of retail investors decides, on the popular social media Reddit, to make a mass investment that caused the price of GameStop's shares to rise, Wall Street was shaken. What the trading ...