Alzheimer’s is a degenerative disease that affects the elderly (with a higher incidence in women) and causes progressive and irreversible loss of brain function, particularly affecting memory. About 30 million people worldwide are estimated to suffer from this disease, and the number is expected to double in the next 20 years. At the moment, there is no definitive and effective cure for this form of dementia, and the probability of suffering from it increases considerably with age.

Up to now, due to their antioxidant and neuroprotective activity, it was believed that cannabinoids could be a natural alternative to be considered both in the treatment of symptoms and in preventing them.

Surprisingly, recent studies and research suggest that linalool could be effective in the treatment and prevention of Alzheimer’s. … But what is linalool? 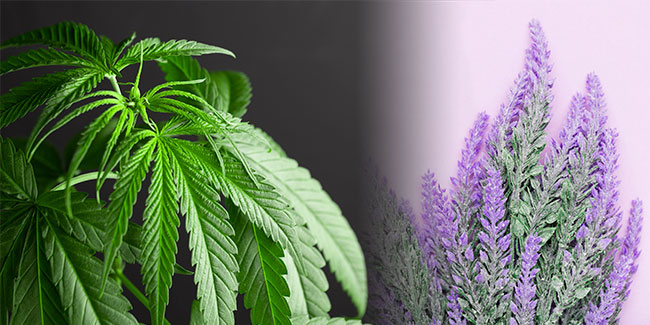 Linalool is a volatile organic compound present in many plant species such as lavender. In addition to being responsible for the characteristic flavour and aroma of this plant, this terpene (which is also present in cannabis) contributes to its therapeutic benefits and, in particular, keeps our brains healthy.

Until recently, it was thought that only cannabinoids were responsible for the medicinal and therapeutic effects of cannabis. This was attributed to linalool, considered a supermolecule, which arises when polymerisation (a process that gives hemp its particular aroma and flavour) of the plant occurs. The latest studies regarding this reinforce the theory that it provides numerous benefits to our body in combination with the different cannabinoids and active ingredients in marijuana.

In ancient times, linalool appeared as a common ingredient in many traditional medicine recipes, which seems to indicate its use as a natural antibiotic. Its beneficial anxiolytic, anti-inflammatory and sleeping aid properties means it goes beyond enhancing the subjective experience of cannabis together with its taste and aroma as believed up to now. Furthermore, it’s known to act on the immune system by strengthening it.

As if this were not enough, other more recent studies on this subject point to linalool as an agent that has very positive effects on our brain, which makes it a perfect element to try to fight Alzheimer’s. This degenerative disease, which currently has no effective cure, gradually causes memory and cognitive function loss in those who suffer from it. Linalool could be a very effective component of cannabis in preventing the disease or alleviating its symptoms.

In some experiments with mice, treatment with this terpene revealed encouraging results: it was found that the number of cellular tangles contributing to the gradual degeneration of the brain that causes the disease in patients was significantly reduced.

In what is termed the “entourage” effect, it has also been proven that the therapeutic effect of terpenes is greater when they are combined with cannabinoids: this increases the beneficial effects of marijuana on the body while at the same time reducing its psychoactivity. This would indicate that terpenes tend to modulate the intensity of cannabinoids, making their medicinal and therapeutic impact much more effective.

These discoveries could help the cannabis industry to take advantage of all the properties of this terpene as not only could its anti-inflammatory, sleeping aid and sedative qualities be crucial in the fight against Alzheimer’s, but also in the treatment of ailments such as insomnia. chronic anxiety and stress, and diseases that occur with episodes of pain.

Most of these oncologists believe in the benefits of cannabis, but only half would give it to their patients.

The Cancer Center of the University of Colorado in the US has surveyed professionals in this branch of medicine with very revealing results. According to this survey, 73% of these doctors ...