Zambia approves the cultivation of medical cannabis for export, leaving small farmers out of the sector.

The Government of Zambia has approved the cultivation of marijuana for export and medicinal use while upholding the prohibition of consumption and possession, which are punishable by up to two years in jail. The measure, unanimously approved at a special cabinet meeting held on December 4th and made public via a statement on December 17th, aims to boost the economy of this African country, making Zambia the fourth country in Africa to legalise the cultivation of cannabis in some of its forms. This comes after Zimbabwe legalised cannabis production for medicinal purposes in 2018 (a year after Lesotho), and in September 2018, South Africa’s constitutional court approved the cultivation and consumption of cannabis (including for recreational use), but not its sale. The Government of Zambia has created a technical committee that will pave the way in implementing this measure.

According to Reuters, the reason behind the legalisation of the production of medical cannabis for export is the hefty fiscal deficit suffered by Zambia; furthermore, it is a country whose external debt reached $10.5 billion at the end of 2018, 20% more than the previous year. The economic forecasts for this year were not positive either; this is due to the poor harvests of 2019 in a country where agriculture accounts for 20% of GDP and 54% of employment (according 2019 data from the World Bank), and the increased prices for electricity and oil which Zambia is forced to import. According to calculations by the opposition Green Party, which has advocated the legalisation of cannabis cultivation for export since 2013, the move could generate up to $ 36 billion annually for Zambia.

“Depending on how it is done, this could change the face of the Zambian economy,” Peter Sinkamba, President of the Green Party, told Reuters. “This can be a blessing or a curse, like diamonds or gold, it depends on the political direction,” he added. 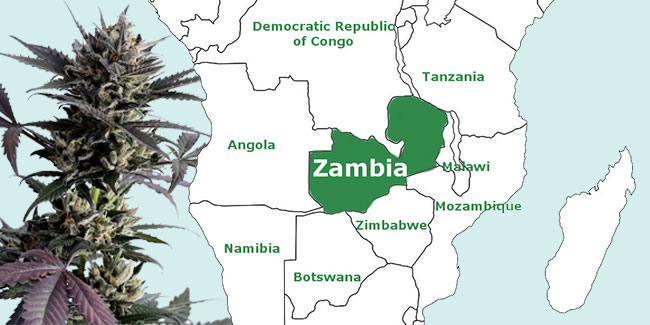 Only for Large Companies

As explained by Dora Siliya, spokesperson for the Zambian government, the cultivation of marijuana will be allowed only for export and via limited licenses at a rate of $250,000 per annum. The agency responsible for granting these licences will be the Zambian Ministry of Health, and the crops will be supervised by the Zambian National Service (a branch of its army) to ensure that the plant is not sold on the local market.

The cost of the licences to access the cannabis sector has led to criticism from local groups and some of the political parties represented in the country, who point out that it will mean excluding the small farmers sector.

“Our biggest problem at the moment is the requirement of a $ 250,000 licence fee,” said Anthony Bwalya, a parliamentarian for the United Party for National Development, the main opposition party with 47% of the vote in the last presidential elections of Zambia in 2016 – as opposed to 48% gained by the Patriotic Front party of Edgar Lungu, president-elect of the country. In an article published in Lusaka Times, Bwalya warns that the cost of the license is an invitation for large foreign investors and local cartels to use Zambia to launder black money. Instead, he proposes that crop management stays in the hands of the army, “creating employment for hundreds of young people and other professionals”, and restricting the entry of foreign investors into the sector so that it is done through partnerships with local companies to avoid unnecessary outsourcing of foreign exchange earnings.

“Politicians must resist the temptation to steal this sector from people. We have already seen this with mukula and other mineral resources where corrupt government officials have been the main beneficiaries while people suffer,” says the parliamentarian in his article, with reference to the machinations around the trafficking of wood from the mukula, a tree that only exists in southern and central Africa.

A Ban on the British Empire

The cultivation, sale and consumption of cannabis (a plant also known in Zambia by the name of ‘ulubangula’) has been banned since 1923 when Zambia was under British Colonial Rule, with the Opium and Habit Forming Drugs Regulations Ordinance: in it, no reference was made to cannabis, but to “dagga”, a word used to refer to cannabis in southern African countries since the seventeenth century.

In March 2017, a statement by the Zambian Ministry of Health indicated that the cultivation of marijuana for medicinal purposes has been legal in the country since 1967, covered by the Dangerous Drugs Act approved that year. The ministerial statement pointed out that the use of medical marijuana was recognised by law in cases of chronic pain, to treat nausea caused by treatments such as chemotherapy, epilepsy, glaucoma and sclerosis symptoms, but also announced that the cultivation of marijuana for medical purposes can only be carried out by/ with a / by those with a licence and that the Ministry of Health did not intend to grant any licence.

“The debate is not about whether it will be done or not, but about how,” stresses deputy of Podemos Lucía Muñoz Dalda on the legalisation of the production, distribution, sale and consumption of ...

In memory of Franco Loja

Franco Loja, a well-known breeder and one of the leading roles of the well known video series Strain Hunters, died on Monday 2 January because of a malaria stroke. At the time of his death he ...