First application for a home-growing permit of medical cannabis in Spain.

On April 20, the so-called 420 for International Marijuana Day, a press conference was held to explain the content of a new license request to the Spanish Agency of Medicines and Medical Devices (AEMPS) and also to present a new documentary trailer that will premiere next September, “Marihuana para vivir“, or “Marijuana to live”, on the life of Juan Manuel Gantes, denouncing the situation of helplessness he is suffering. It is the first time that the AEMPS, the above-mentioned drug regulatory agency in Spain, receives a request from an individual to grow cannabis to be consumed exclusively for therapeutic purposes to help alleviate chronic pain. Meanwhile, social support for the legalization of marijuana is growing, 90% in the case of medicinal use, according to the national Sociological Reasearch Center (CIS). There are hardly any references to know what position the government institution will adopt, but if we take a look at the latest judicial decisions on home growing of medical cannabis, the answer should be yes, according to the sentence that recognized Aritza Alunda’s right to cultivate more than thousand marijuana plants for medicinal purposes.

That Tuesday 20th, Juan Manuel Rodríguez Gantes, a 49-year-old Galician patient, announced his request to the AEMPS for a license for the home growingof medicinal cannabis issued publicly with the support of the European Observatory for the Cultivation and Consumption of Cannabis (OECCC) a Spanish association dedicated to supporting the regulation of cannabis. “Well, it is that not even requesting it is simple. You need to specify everything: how many plants you will have, what extension they will occupy, how much THC or cannabidiol content there will be in the plants, traceability certificates, how is the facility where you will grow the crop and even the endorsement by an agronomist regarding the seeds, which, by the way, are not cheap either. We are talking about thousands of euros, “says Hugo Madera, president of the OECCC, one of the most struggling entities for legalization. “If I succeeded, it would be a relief for me, but also an open door for other patients who find a remedy for pain in cannabis” explained Juan Manuel at the press conference in which he announced his application to the AEMPS.

So far, the institution responsible for the approval for production and commercialization of medicines in Spain has granted eleven licenses for the cultivation of medicinal cannabis to companies and universities for research purposes, according to the AEMPS itself in a report updated on April 21. So far, it has also granted another eight licenses for the production of drugs derived from cannabis, although the vast majority are for marketing in other European countries, since in Spain the only drug approved for marketing made from this plant is Sativex, indicated for multiple sclerosis patients, manufactured by the Belgian GW Pharma and marketed in Spain by Almirall. 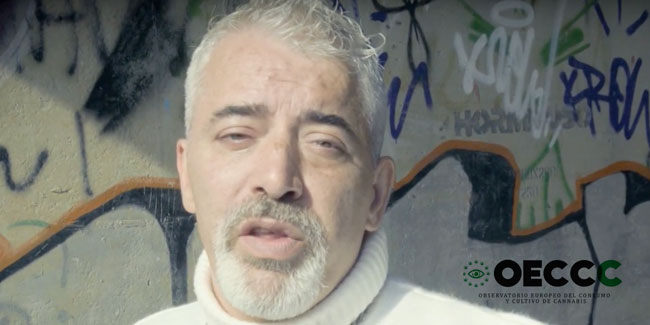 The case of Juan Manuel is just one of the long list of people who have turned to cannabis to be able to endure chronic pain caused by serious illnesses or health problems. In his case, at the age of 19 he suffered an accident that left him quadriplegic due to a spinal injury. After going through several hospitals, he got a place at the IMSERSO Center for Attention to People with Physical Disabilities in Ferrol. The aftermath of his accident forces him to take 30 pills every day to ease spasms, neuropathic pain, as well as analgesics and sleeping pills. In 2000, he started using cannabis. The plant allowed him to reduce his pain and reduce the consumption of painkillers, it has also allowed him to improve his mood and get out of a deep depressive process.

However, the cultivation and consumption of medical cannabis has caused problems derived from legal insecurity that has been causing the lack of legislation on medical cannabis. When he decided to stop going to the black market and spend his small pension on buying a closet in which to grow the fifteen marijuana plants that he calculated would provide him with cannabis for the whole year, he was met with a complaint from the center where he lives. The police came to his room at the Center for Attention to People with Physical Disabilities and searched his possessions. The judge himself who instructed the case had to go to his room in this center to take a statement from him since Juan Manuel could not travel due to his state of health, and later this judge decided to archive the case and withdraw the complaint.

On another occasion, the police returned to the center to search his room and seized the 80 joints that he had prepared for several months. “A kid had made them because, obviously, I can’t. I am not a drug dealer but a therapeutic consumer” as explained by Juan Manuel at the press conference.

He was once taken to the police station and was threatened with sanctions for buying marijuana on the black market, although these sanctions never were materialized. “I smoke cannabis because it makes feel good, it takes away the pain. I don’t think I need any permission from the police or the judge to do so” Juan Manuel added.

“It is intolerable to treat Juan Manuel Rodríguez Gantes, as a criminal. Homegrowing is allowed by a framework decision of the European Union, but the regulations are ambiguous. There is no health without dignity. It is urgent that the Government give a solution to the thousands of patients in Spain who are in the same situation as Juan Manuel” argues Héctor Brotons, director of the Brotsanbert law firm, in charge of designing the application for culture before the AEMPS

As in the judicial process to which Juan Manuel is immersed, there are several judges who have refused to bring medical cannabis users to trial or who have sentenced their right to be able to do so freely. One of the latest cases that have made the most impact is that of Aritza Alunda, who was acquitted in March by the Criminal Court number 3 of Santander for a crime of drug trafficking since he had a plantation of 1,116 cannabis plants that he used to make tinctures to apply on the more than 20 myoblastomas that you have in your body. The case of Fernanda de la Figuera is much earlier, in 1995 a court recognized her right to grow marijuana for medicinal purposes.

“I don’t want to have to resort to the black market or have the police chase me to get a fine. Home growing gives me the dignity of cultivating the plant whose medicine I need” Juan Manuel points out as the reason that led him to request a home growing license from the AEMPS.

If your response to the request of Juan Manuel Rodríguez Gantes follows the line that the courts are marking against the cultivation of medicinal cannabis for their own use, it will mark a new step in the rights of consumers in the face of the existing legal gap.