The Government of North Macedonia brings to the table the issue of legalization of cannabis for recreational use in this country, where medical marijuana has been legal since 2016. “The idea is to allow consumption of marijuana in cafes and tourist areas, also in Skopje, the capital, if they respect certain standards on ventilation, proof of origin of the cannabis, etc.”, declared Prime Minister Zoran Zaev in an interview to Deutsche Welle.

Zaev referred to Amsterdam and The Netherlands as the example of reference for his initiative and stressed that if legalization is finally approved, it will be done under strict control and regulation. Although the government of the Social Democratic Union has not adopted any final decision on this issue yet, the leader insists on the idea that if the majority of the country’s population says no to the new legislative proposal, there will not be a nationwide legalization of recreational cannabis. 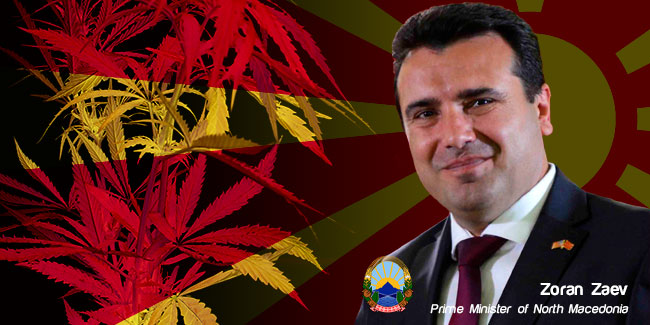 The possibility of legalize and tax marijuana was proposed as one of the measures of the government’s plan to revitalize the nation’s flagging economy, which has also suffered a severe blow as a result of the COVID health crisis, but the Macedonian prime minister arouse the question and started a national debate on the regulation of the plant over two years ago.

Zaev, leader of the Social Democratic Union, has been the prime minister of North Macedonia since August 2020, when his party won the parliamentary elections. In 2017, he held this same position in office after being appointed by former president Gjorge Ivanov, but then he resigned in January 2020 after the European Union refused the negotiation to begin the process of accession of this country as a member state. During those years, the country, which became independent in 1991 within the framework of the civil war in the former Yugoslavia, triggered international concern and set the stage for a conflict due to the nation’s naming dispute, which changed from the initial Socialist Republic of Macedonia to the Republic of Macedonia and, finally, after an agreement with Greece, to the current Republic of North Macedonia.

During those years, Macedonia started its active involvement in terms of cannabis regulation. In 2016, the country passed a new law allowing pharmacies to sell, even without prescription, cannabis oils with a low concentration of cannabinoids with psychotropic effects and permitted health professionals to prescribe other products with higher concentrations for patients with epilepsy, HIV, or multiple sclerosis, among others medical conditions, according to Balkan Insight. The measure was applauded by the cannabis association “Green Alternative” but other organizations denounced that the law was tailored to meet the needs of large business groups and leave out small-scale producers. Actually, home growing of cannabis still remain illegal in the country and its illegal distribution is severely punished with sentences of up to ten years in prison.

The Macedonian weekly newspaper Republika published in April 2019 that at least three of the fifteen companies that had received licenses to produce medicinal cannabis in Macedonia are related to Zaev. Actually one of these businesses, MAM, is owned by Trajce Zaev, one of the prime minister’s cousins, and has already grown cannabis crops on 20,000 sq. meters in greenhouses in the town of Sveti Nicole since 2017, according to a report by the business advisory firm Bearstone Global and published in April 2019. In October of the same year, former Foreign Minister Antonio Milososki asked Primer Minister in Parliament about the content of the meeting held with Mike Straumietis, the ‘marijuana millionaire’, founder and CEO of the Canadian company Advanced Nutrients.

“Our government does nothing secretly. It is a manipulation to talk about drugs. My family has its own investment in Sveti Nikole. People are being hired and the value is more than 100 million euros. The current market for medical cannabis represents over 500 million euros and is expected to reach several billions. It’s nice to see an epileptic child instantly become normal with cannabis use. We were only talking about investments” Prime Minister had then declared.

The eco-construction through the Hempcrete

There is a trend in hemp building that is giving plenty to talk about lately. It is the Hempcrete, a material that stands out for being light and resistant at the same ...